Sequel has just as much horsepower as the first

With femme fatales, "French Connection" inspired car chase scenes, a balding Australian with moves like Jackie Chan, hot cars and more explosions than the National Mall on July 4, "Transporter 2" accomplishes exactly what its predecessor, "The Transporter" does; it returns to basics,which in an age where Tom Cruise can set the standards with Mission Impossible II, is more than just a welcome change.

Directed by Louis Leterrier and co-written by Robert Kamen and Luc Besson, "Transporter 2" is not made to be memorable; it is not made to innovate and inspire; it is made to satisfy that guilty pleasure we all hold inside of us that enjoys seeing one man immobilize seven others with a fire hydrant hose, deflect bullets with a door, jump from a speeding Lamborghini onto a moving plane and kick butt with the composure of Bruce Lee without breaking a sweat. That's what makes it an outstanding movie. 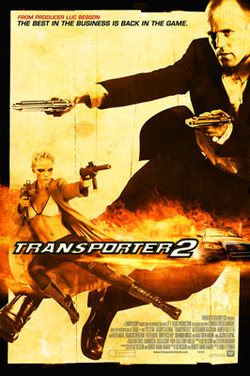 Photo:
Jason Statham, the biggest sensation to come from Australia since Russell Crowe, plays Transporter Frank Martin, an ex-special forces op, who, after retiring from the military life, becomes a wheel man for the highest bidder. A mercenary of sorts, he is the best in the business, and as long as his clients obey his rules, they have his guarantee that they won't get caught. The loner type, he is mostly without friends or contacts except for one French police officer, Francois Berleand, who he trusts with his secret identity.

Frank's latest deal has led him to Miami, Florida, many miles from his native France, where he finds himself escorting a wealthy politician's young son, Jack Billings (Jason Cleary) home from school everyday. Breaking his number one rule of `No attachments,' Frank grows fond of Jack over the month that he's in his care. So it's no surprise to the audience that, despite the police's pursuit of him as the potential kidnapper, he decides to track down Jack after he is taken by a Colombian drug mercenary. Caught up in a plot to eliminate the United States' drug enforcement officials, Frank is again called upon to prevent impending doom and once more, save the day, and by doing so, transition the movie's plot to the classic action thriller type we've all come to know and love.

Also starring Amber Valletta (Audrey Billings) as the concerned mother, Alessandro Gassman (Gianni) as the hired mercenary mastermind and Kate Nauta (Lola) as the trigger-happy lingerie model, "Transporter 2" wisely minimizes their role. Though essential in developing the basic plot, their ship would sink, along with the movie if not for Jason Statham.
The script is not amazing, yet something about an ominous plot with rogue Colombian mercenaries working to spread a devastating, non-realistic virus that would send the U.S. into a downward spiral glues everyone's eyes to the screen. Despite knowing that everything must turn out all right if we're to see a "Transporter 3," we're once again forced to the edge of our seats in anticipation.

As to what's next for Statham, rumors can only speculate. With the muscle of Jean-Claude Van Damm and the wit of George Clooney, anything is possible. With the retirement of Pierce Brosnan from his infamous Bond career, perhaps this will be the start of a James that does his own stunts.