The game started off like so many of the other games this season. Blair's ice hockey team (0-7) fell behind in the first period, and the crowd was ready for another disappointing blowout. But the team staged a riveting comeback in the second and third periods, playing an intense, physical game that was its closest this year, despite the eventual loss. 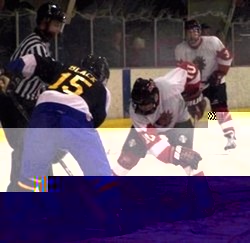 Photo: Senior Joe Noyes faces off against a Gaithersburg player during the hockey game at Wheaton Outdoor Ice Rink on Jan. 27 Blair lost, 7-4.

Photo: Senior Joe Noyes faces off against a Gaithersburg player during the hockey game at Wheaton Outdoor Ice Rink on Jan. 27 Blair lost, 7-4.

The Blazers were again hurt most by their relative inexperience compared to the Trojans, who have many club players with many years of hockey under their belts. The Gaithersburg team played with synergy, outclassing the Blazers with their crisp passing and skating.

The first period began promisingly, with both teams moving the puck back and forth and appearing to be evenly matched. The balance shifted in the fifth minute when a Trojan player skated around behind the net and tapped the puck in past junior Robbie Ginsberg. The Blazers didn't get discouraged, however, and came right back two minutes later when senior Peter Semitekolos scored on assists from senior Jesse Mueller and sophomore Alex Sandberg-Bernard. The Trojans then stepped up their game, launching a relentless assault on goal and scoring three more times before the end of the period, to the disappointment of the formerly raucous crowd.

As in many of their previous games, the Blazers stepped up their intensity and got more physical in the second period. They took back the momentum from Gaithersburg early on when senior Lee Shields scored on a quick shot from just in front of the goal. The Trojans responded to the Blazers' increased physicality, and there were many penalties for each team.

Late in the period two Gaithersburg players were put in the box, leading to a double power play lasting for 1:37. The Trojans pulled back and concentrated on keeping the puck far from their side of the rink, succeeding mostly due to the Blazers' sloppy passing and blade work. As the penalty time was running out, though, several Blazers rushed the goal and Shields scored again to bring the score to 4-3. Following the goal, a fight broke out behind the net and junior Marty Viger was ejected by the referee. According to coach Kevin McCabe, he will miss the next two games as well.

The Blair squad maintained their momentum early in the third period, with an early goal by sophomore Ben Kastner to tie the game. However, the comeback fizzled when the Trojans scored their fifth goal six minutes in to retake the lead. The Blazers tried hard to regain the lead, but could not penetrate the Gaithersburg defense, and the Trojans scored twice more in the closing minutes of the game to seal the win with a final score of 7-4.

According to junior goalie Aaron Jarboe, who replaced Ginsberg in the second period, the team was satisfied with their performance. "We feel good that we came back, even though we lost in the end," he said.

Ginsberg was proud of the way the offense played, saying that, "Our offense has improved a lot this season so if we just keep getting better we'll be fine."

The Blazers' next game is Tuesday Jan. 31 at Wheaton Indoor against Springbrook at 5:15 p.m.