The start of a new era for Maryland basketball

On May 5, legendary college basketball coach Gary Williams announced his decision to retire after a 22-year tenure at the University of Maryland. During his time in College Park, Williams built Maryland into one of the nation's premiere basketball programs, racking up accomplishments such as 14 NCAA tournaments berths, three regular season ACC championships, two trips to the final four and a national championship in 2002. Williams' retirement marks the end of an era for Terrapin basketball and signals the departure of one of college basketball's greatest head coaches. On May 9, four days after Williams' retirement, Maryland announced it had found a replacement: former Texas A&M head coach Mark Turgeon.

Terp fans are sad to see Gary go, but there is a general feeling of welcome for Turgeon, winner of 24 games with the Aggies last season. During his 13-year head coaching career, Turgeon has posted a 249-158 overall record. The 46-year-old began gaining recognition during his tenure at Wichita State, when he took the Shockers to the Sweet Sixteen after upsetting second-seeded Tennessee.

Upon landing his new coaching job, Turgeon began to form his new coaching staff. On May 16, Turgeon hired assistant coach and recruiter Dalonte Hill from Kansas State. Hill used to coach the AAU team DC Assault and helped bring Michael Beasley to K-State in 2007. Among the other hires were Scott Spinelli, an assistant coach under Turgeon at Texas A&M, and Bino Ranson, who retained his job held previously under the Williams regime.

Williams' retirement had an effect on recruiting. Justin Anderson, the highly touted 2012 recruit from Montrose Christian high school in Rockville, verbally committed to play at Maryland back in March. But when Williams retired, Anderson had a change of heart. The 6'5" lefty small forward decommitted from U-MD and decided to take his talents to the University of Virginia. In an article published on May 26, Anderson told the Washington Post, "I went to Maryland to play for Coach Williams and Coach Ehsan, that was my main reason for going to Maryland. To find out both of them were not there, that was pretty tough for me in my recruiting." But Anderson wasn't the only one to switch schools. Senior Sterling Gibbs, the 25th ranked point guard in his class, obtained a release from his letter of intent to Maryland and decided to sign with Texas. Meanwhile, 6'9" German power forward Martin Breunig got a release as well and is reportedly visiting other colleges. 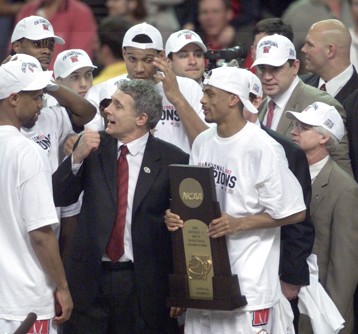 Photo: Gary Williams and the 2002 Maryland basketball team celebrate a national title. Williams stepped down as head coach on May 5.

Photo: Gary Williams and the 2002 Maryland basketball team celebrate a national title. Williams stepped down as head coach on May 5.

Maryland is looking to turn things around this year after going 19-14 and failing to make even the NIT tournament. Guards Terrell Stoglin and Sean Mosley are expected to carry the load for the Terrapins next season, with Pe'Shon Howard seeing an increased amount of minutes as well. The Terps' roster took a big blow when star center Jordan Williams announced his decision to forgo his final two seasons in College Park and enter the NBA draft. Despite losing Williams to the NBA and a few key recruits to different schools, Maryland is still intent on competing in an ACC largely dominated by Duke and North Carolina.

Terp fans are dissappointed to lose Williams, and rightfully so. He brought Maryland its first and only national title with a special team led by Juan Dixon, Steve Blake and Lonny Baxter in '02. However, the 66-year-old coaching great was ready to move on. While Williams will remain at U-MD as the special assistant to the athletic director, the school seems to have found the right fit for its new head coach in Turgeon.