Turned off by other resources, Blazers turn to Wikipedia

When freshman Richard Higgins had to do a group project on Native American chiefs, he nixed Newsbank, overlooked World Book and passed by ProQuest. Instead, Higgins went straight to Wikipedia, an online encyclopedia, where he found enough information to complete his part of the poster project: research on the Native American chief "Black Kettle."

Higgins is one of a growing number of web-users turning away from conventional research sources in favor of Wikipedia, a free online encyclopedia that allows anyone to make edits to the more than 3,300,000 articles in the database. An informal survey of 100 Blair students on Oct. 5 showed that over 82 percent of students familiar with Wikipedia have used it for school-related purposes. For these Blazers, Wikipedia offers an easier alternative to the usual online encyclopedia due to its editable nature, free content and user-friendly design.

Wikipedia, created by the Wikimedia Foundation, Inc.; is the first of its kind, a dynamic open-content encyclopedia featuring a plethora of articles on diverse topics. From its birth in 2001, Wikipedia, located at www.wikipedia.org, has become the 37th most frequented website on the Internet.

Since 2001, Wikipedia has evolved and branched into several different sites, including Wikitionary, an online dictionary; Wikinews, a free-content news site and Wikisource, a free-content library.

For some, Wikipedia's ever-growing collection of factoids and intriuging information serves as a fun database to explore; an interesting stop to make while browsing online. For freshman Jennifer Collins, who doesn't have access to popular online sites like the video sharing network YouTube and the social networking site MySpace, Wikipedia and its sister sites are her way of spending time online. "It's a neat little time waster for me," she says.

Photo: Some Blazers turn to the collaborative encyclopedia when they run into dead ends in their research.

Photo: Some Blazers turn to the collaborative encyclopedia when they run into dead ends in their research.

Pages are constantly created and edited based on current events, and anyone who has a computer with Internet access can create a page or edit an existing one. Wikipedia is also different from other encyclopedias, both in print and online, because it is free and easy to use; no subscriptions or passwords are necessary. "It's very easy to navigate around it," says Higgins. "It's not as complicated as Britannica Online and others."

But not all self-dubbed Wikipedians use their editing power for good. Vandalism of pages is a problem for both users and Wikimedia, but vandals can be blocked from the site and certain pages cannot be edited by anonymous Wikipedians.

The good, the bad, the edited

Even with the precautions put in place for editing, Wikipedia's open editing is seen as both a curse and blessing. Virtually anyone can edit data, so the information is not necessarily accurate.

Media specialist Lisa Hack says that she loves the concept of Wikipedia. "I like the idea that people with knowledge can contribute to a database that is open to everybody," she says. But, Hack notes that Wikipedia is openness makes it inherently flawed. The authors of Wikipedia sites are essentially anonymous which may create a lapse in credibility. Hack cites vandalism, exaggeration and bias she sees on Wikipedia as its primary flaws and says that an article "could be great today and biased tomorrow."

While Wikipedia has an editing board in place, they do not review all the changes that are made daily. Blair US history teacher Anne Manuel had an amusing encounter with Wikipedia's lack of editing over the previous summer. Friends of Manuel's daughter Nora Mascioli were "betting on how quickly Wikipedia would catch errors they put in," Manuel said. According to Manuel, the friends put a picture of Lord Voldemort (Harry Potter's foe in the "Harry Potter" series) in place of President George W. Bush on the latter's Wikipedia site. They also slipped a derogatory comment into an entry for the city of Camden, New Jersey, stating that "Camden is nothing but a big ole crack house." While the George Bush prank was noticed and quickly changed, Manuel says that the "crack house" comment "stayed on the site for more than 3 weeks."

Recently, the debate on Wikipedia's precision has transcended the classroom into the media, where studies have been compiled to determine Wikipedia's accuracy. In Dec. 2005, Nature Journal conducted a validity study on 42 scientific articles from Wikipedia and the corresponding 42 articles from the gold-standard of encyclopedias: Encyclopaedia Britannica. Nature's article on the study concluded that the articles on Wikipedia and Britannica had an average of four and three errors, respectively. The article also stated that, "Britannica's advantage [over Wikipedia] may not be that great, at least when it comes to science entries."

Although the Nature study suggests that Britannica may not be as accurate as one might hope, the fact still stands that open-editing comes with a price â€" factual errors. Hack suggests that students double check Wikipedia information on print sources and the encyclopedias that the school has subscribed to. "If you're using [Wikipedia] for school, you should double-check it with another source," she says. 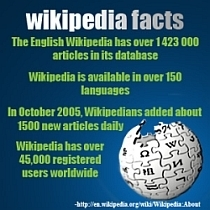 Photo:
Media specialist Andrea Lamphier agrees, saying that if students are limited to only one source, it shouldn't be Wikipedia. Since last year, when Wikipedia first cropped up at Blair, both Hack and Lamphier have changed their minds about it.

"[Last year], we were anti-Wikipedia, no question. We've both evolved in our opinion quite a bit," Lamphier says. "We're not anti Wikipedia, it's just the reliance on one source that bothers me."

For many students, though, it is a pain to double and triple check information in other, more reputable sources. Junior Stefan Reckson puts his complete trust in Wikipedia when it comes to school research. "I just trust Wikipedia and hope that they're not lying to me," he says. Most of the time, Reckson doesn't bother from turning to other sources, like online and print encyclopedias, because he thinks it's too much work. "Wikipedia is easier," he says. "You don't have to look in the planbook or anything. You can just use it."

The only time that Reckson has found an error in a Wikipedia page was when he did research for his health class. Reckson saw that on Wikipedia, information about ecstacy contradicted from the information in his textbook. Reckson took the liberty of making the change for other Wikipedia users. "I figured out how to edit it, and I changed it," he says.

For others, Wikipedia contains information that is hard to find elsewhere. For his history project on Native American chiefs, Higgins turned to Wikipedia first and, when he searched for more information on different web sites and the media center's Patron's catalog, he was unable to find any.

Since 2001, Wikipedia has spread, and now, web searches often show a link to the site, a simple search on Google, for example generally yields Wikipedia as one of the top ten websites. Searches for the strings "United States of America," "2006" and "FIFA World Cup" on Google can have links to Wikipedia as the first or third hit.

Lamphier cites this as one of the reasons that students turn to Wikipedia so often. She says that in an Internet search, "all roads seemed to lead to Wikipedia."