Blair has second-highest number of semifinalists in the nation

As announced in an assembly today, Blair has 12 semifinalists out of a total 300 in the 66th annual Intel Science Talent Search. Out of all the schools whose students submitted projects in the competition, Blair had the second-highest number of semifinalists.

All 12 semifinalists have been presented with checks for $1,000. The Intel Science Service also gave the school $12,000 for the students' achievements.

Many magnet students choose to take the Research Project class during the second semester of their junior year and the first semester of their senior year. As a part of the class, students complete an internship in the fields of math, science or technology during the summer between their junior and senior years. This year, 38 of those students submitted the project that they worked on at their internship into the competition. 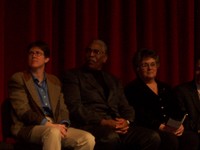 Following a brief speech by Principal Phillip Gainous, a representative from the Intel Science Service took the stage and praised all the seniors for their hard work in regards to the competition, calling them the "next generation of inventors and innovators of the country." Magnet research teacher Glenda Torrence then called up semifinalists, saying, "I feel like I'm at the Academy Awards right now."

Senior Allen Zhang, one of the 12 semifinalists, voiced optimism about Blair's prospects in the next round. "I think we have a lot of strong competitors," he said. "We have a lot of people who have already won prizes in other competitions, so I think we'll do well."

Heidler concurred, saying, "I'm very proud of the senior class's efforts. I look forward to the next round, and hopefully, we'll have some finalists."

Photo: Ten of the 12 Blair semifinalists in the 66th Intel competition with their checks. Photo taken by Deepa Chellappa.

Photo: Ten of the 12 Blair semifinalists in the 66th Intel competition with their checks. Photo taken by Deepa Chellappa.