The drum line begins to tap, the trumpets herald and the flutes begin to softly blow. As the marching band struts across the field, four Blazers in glittering red costumes follow, twirling their flags and stepping to the beat. Halfway across the stadium, they pause, pivot toward the audience and transition into a new routine of bright red whirls. 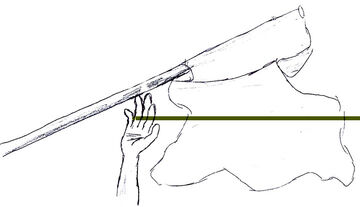 Photo:
These four Blazers make up Blair's color guard. Present and visible at every football game but unknown to many Blazers, color guard is responsible for translating the marching band's vibrant tunes and fight songs into choreographed performances for the fans in the stands. And though small in size, color guard forms a part of the world where passion and skill are paramount.

Blair's color guard, despite their size, boasts an impressive history. Originated at the old Blair, the color guard has marched alongside the band and excited fans during football games every fall. The color guard even performed during the 2008 filming of the movie "State of Play" in Washington D.C. alongside the marching band.

On their home turf, the Blair color guard works with the marching band's music to create an interesting visual and motivate the fans. The guard has a standard routine for the fight song, but is also fluent in other basic routines of different steps and flag handling. The routines can be adjusted for most other songs performed, according to senior Chanvearsna Omkar. Color guard coach Matt Stover choreographs the guard's main routines, teaching them flag techniques and marching rhythms for halftime shows. Stover is the backbone of Blair's color guard as he teaches them the basics and allows them to insert their own creativity as well. "Matt teaches us everything and we either jazz it up or jazz it down," says senior Hiba Ahmed. Stover, who choreographs for other schools around the county, comes to the guard's practices about once a week to teach them routines that he has choreographed, and comes more often when the time comes to prepare them for important events such as the Homecoming game or a competition. The guard practices twice a week during the football season, and sometimes holds extra practices before important games or competitions. 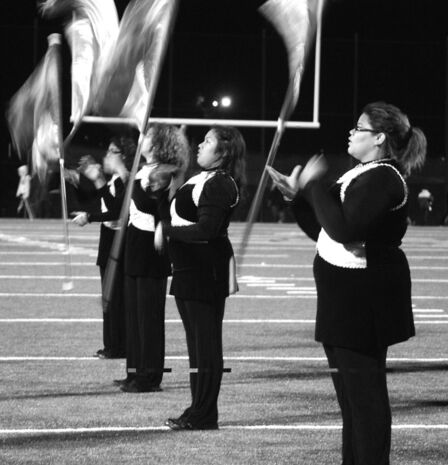 Photo: Senior Chanvearsna Omkar and senior Kelsi Jenkins among others cheer on the football team with their colorful flags.

Photo: Senior Chanvearsna Omkar and senior Kelsi Jenkins among others cheer on the football team with their colorful flags.

The relentless practice gives the color guard routines that they can perform with confidence. The group provides entertainment for fans in addition to the marching band's music, using dance routines to show a different side of the marching band's tunes and take pride in their unique art. "Color guard is artistic," explains senior member Chanvearsna Omkar. "We express the music. You shouldn't compare color guard to cheerleaders." The guard's performances use several variables in their attempts to make the marching band's music come to life. "In the world of the color guard show, we use music, dance, equipment and staging to allow us to tell the story," says Chris Putnam, director of Education for the Mid Continent Color Guard Association. "The music will inspire the choreography and staging choices that will allow the story to be told."

Though Blair's color guard is dedicated and hard working, they realize how little attention their group receives, according to Ahmed. "Most people don't know about color guard or what we do. It's not just random people tossing flags, we actually work hard," says Ahmed. This year's four members of color guard participate for pleasure, but they do take their performances seriously. "It is fun and the people who do color guard are usually passionate about what they do," says Omkar. Putnam attributes the lack of participation in color guards to their anonymity and the community's lack of awareness. "It is often easier to create a culture in the 'common' sports, because those sports are also ingrained in our community and national cultures," Putnam explains. "Color guard has yet to have that sort of 'universal' culture, so it requires help from a director to create that culture."

The Blair color guard even competes alongside the marching band at competitions but is scored by a separate color guard judge, according to Omkar. Blair's color guard competes alone without the marching band during the winter season, when it is officially deemed "WinterGuard." At these competitions, the judges look for the guard's use of equipment such as flags, the preciseness of their steps and the originality of the routine. Overall, though, the judge focuses on how well the guard translates the music of the band, according to Putnam. "The goal is to interpret the music and have the sounds represented for us visually while we hear them aurally," says Putnam.

Hopefully, after a successful run during their competition the Blair color guard will be ready to recruit more members and build upon their achievements.