A small panel of judges chose two Blair students to be part of the Congressional Art Award Juried Show at the awards ceremony, which took place between 7 and 8:30 p.m. at the Strathmore Mansion on April 11. 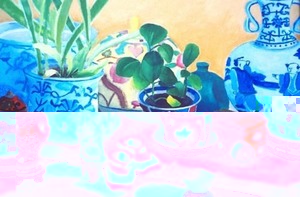 This year's judges viewed art pieces by over 170 high-school artists from Congressman Chris Van Hollen's district, the congressman said at the ceremony. At the Strathmore exhibition, which featured all works submitted for judging, senior Robyn Haley and sophomore Eric Su received special recognition for their acrylic paintings, Bartender and Chinese Still Life respectively, as part of the Juried Show, which included 85 pieces, according to Haley.

The first-prize piece of this year's competition, Mannequin by Aydin Hamami of Walt Whitman High School, will be displayed along with other districts' first-prize works for a year at the Cannon Tunnel in Capitol Hill. Also, Van Hollen will hang the three runner-up pieces, self-portraits by two Albert Einstein High School students and a Whitman student, in his congressional office for a year, according to his web site.

A runner-up in the 2003 Congressional Art Competition, Haley, who is on Silver Chips art staff, also received a Golden Key at the Scholastic Art Awards this year. According to her, high-school artists should seize all opportunities to earn recognition for their artistic achievements. "I think it's worth getting your work out there," Haley said. "From a sort of mercenary outlook, if you use your art to get some awards, it looks good on your college application. But also, you have an obligation to yourself to be praised for doing something well." Haley recommends that student artists enter the National Foundation for Advancement in the Arts Awards, the Scholastic Awards and the Montgomery College School of Art and Design competition, in addition to the Congressional Art Award.

Art teacher Audrey Wilson, who said that she is very proud of being part of a school that has so many talented students, also suggests that young artists could consider local competitions such as the Yellow Barn Studio High School Art Award. However, Wilson admitted that she is not a fan of art contests. "It's very hard to determine what the judges are looking for," she explained.

Haley, however, thinks the subjective judging process is more reason to enter a broader variety of contests. "Every judging is controversial and the people who look at your work might dislike it not because it's not good but because it's not their style. So the downside of entering an art contest is that you're putting something personal out there, and you can get discouraged. But hey, you never know, someone else in another competition might like it, and you could win."

Su, on the other hand, said the best part about art competitions, especially the Congressional Art Competition, was getting a chance to view the works of his peers. "I think while it's good to get some honor out of a contest, the most interesting part of the process is to see how your work matches up against to some other people's works," stated Su, who has only entered two art contests so far. "[At the Congressional Art Competition,] I got to see works of amateur artists at my age level and to gauge the level of high-school art, which is better than I thought. That showed me that I still have a lot of room for improvement. So my advice is not to worry about the results, and just focus on getting better."

Su has taken private art classes since sixth grade but feels that art will only be a hobby to him. "Art is my form of expression and distraction, and I get so absorbed that I forget about everything else. It gives me a good feeling, but I don't think I can do it professionally," Su said.

For Haley, art is a passion worthy of lifelong pursuit. "I want to be an animator, and maybe even own my own studio someday," Haley said. Her motivation comes from her family, her teachers and her friends, as well as a desire to avenge Walt Disney, according to her. "I want 2-D animation to be cool again, and I want to bring the classic 2-D animation style back because I'm sure poor old Walt Disney is turning in his grave right now at the new 3-D animation trend," said Haley.