When science teacher Aaron Williams strolled through the halls of Blair as a student in 1996, he was taken aback by the many "pockets of racism" he saw in a school famed for its diversity. The disparity was clear from a quick glance: One hall was filled with blacks, while others were occupied mostly by white students. Despite promising racial statistics, self-segregation loomed in every corner.

To Williams, Blair's label as the melting pot was a misnomer, but a misnomer that would inspire him to make a difference. During his junior year, Williams joined the Operation Understanding Program (OUDC).

Founded originally in 1995, the Washington, D.C.-area youth program is an effort to strengthen the decaying relationship between blacks and Jews, two groups that share significant historical commonalities. It also extends to larger goals including battling racism, anti-Semitism and all forms of discrimination. OUDC has offered a unique opportunity for students of African and Jewish heritage at Blair to explore similarities between their cultures.

OUDC sudents on a retreat to civil rights sites.

OUDC sudents on a retreat to civil rights sites.

Williams, who is black and joined OUDC in its second year, grew up hearing that Jews were all affluent, white business owners and that blacks were all exceptional at dancing and rapping. And up until that point, he believed it, too. "Before, I tended to gravitate toward people of my same race," he admits. The OUDC experience, however, acted as a springboard, encouraging him to shed his stereotypes and make a difference.

Students in OUDC join for many reasons, but most possess a good dose of curiosity as well as a deep passion for leadership. For junior Emma Hutchinson, a Jewish American currently in OUDC class 11, the program was a prime opportunity for her to explore both her own Jewish heritage and the culture of others.

Regardless of background, 32 students were brought together February of this year to experience the unique three-component program, says Program Director Rael Nelson-James. During the first section of OUDC, stretching from the commencement ceremony on Martin Luther King, Jr.'s birthday to the end of the spring semester, students go on retreats and attend weekly seminars.

Hutchinson, in particular, was awed by the program's ability to bring individuals together. During one retreat, the cry of a Hilton hotel's fire alarm forced Hutchinson and junior Natalie Friedman along with the remaining OUDC group out of the building and into the freezing winter weather. Stranded in the middle of a Silver Spring sidewalk, the group of students – who had been complete strangers 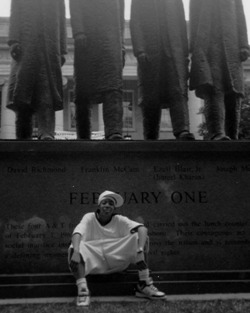 Photo: On a retreat, Slaughter poses in front of a historic statue.

Photo: On a retreat, Slaughter poses in front of a historic statue.

just two days ago – huddled against one another singing the Civil Rights song "We Shall Overcome." By the end of a mere three-day retreat, they had grown so close, says Friedman, that tears of joy brimmed from the eyes of several students.

The highlight of the OUDC experience is the three-week summer trip where students visit historically significant sites to both Jewish and black cultures. They cover six different states, traveling to Harlem and Jewish communities in New York and southward to North Carolina, Alabama, Georgia, Mississippi and Tennessee, all historically significant sites in the civil rights movement.

Through the program's summer trip, students are thrust into applications of what they have learned, says Nelson-James. During the trip to Alabama, senior Aaron Slaughter, a recent graduate of the program, witnessed the historic removal of the Ten Commandments from the courthouse. Onlookers and protesters watched as the crane swooped down to remove the large stone tablet, and for the first time, Slaughter and his group were challenged about their opinions outside of a familiar, closed environment.

The final OUDC component carries into the first semester of the students' senior year, culminating in several leadership workshops.

In a small White Oak Elementary School classroom, Slaughter and a couple other OUDC members began their diversity workshop for a group of seventh graders. At first unsure of the response-level of these middle school students, Slaughter was both surprised and relieved that they could relate to the issues in the discussion. "It felt good to be able to outreach to the youth who could someday be in programs like this," he says.

The greatest overarching lesson that OUDC teaches is the value of not feeding into stereotypes. For Slaughter, this lesson has been pivotal. "I used to judge people – I no longer do," he asserts.

The program reinforces this lesson by encouraging students to attend religious events outside of their own traditions. Williams, a Baptist, hosted an Easter celebration for Jewish members and later attended the celebration of the Jewish holiday Sukkot in another student's home.

OUDC has impacted student career goals as well. Slaughter now hovers over pursuing diversity training as his vocation. Having returned to Blair and witnessed similar self-segregation still present in its halls, Williams applies the lessons to his classroom, where he sometimes still hears racist jokes.

Still, there are many strides to take before the program's missions can come true. Critics argue that the program's efforts fail to make a significant impact in the community. Nonetheless, Slaughter emphasizes that OUDC has provided a prelude for such a dream to take place. "Baby steps at a time," he says. "You have to crawl before you walk."

Yicong Liu. Yicong Liu is a junior in the magnet program at Blair high school. She enjoys the many (I mean many) wonderful things in life, but mostly the fundamentals: food, sleep and fun. During the hectic school week, Yicong can be found staring at her computer … More »