The Blair counseling department has two new faces this year, Leanna Binick and Antia Reddicks. Both counselors look forward to getting to know the Blair community, and helping their students move forward towards whatever their goals are beyond high school.

Antia Reddicks is new at Blair - but not to being a school counselor. She held the same position for several years in Montgomery County at Farquhar Middle School and Eastern Middle School. Her students from Eastern are now sophomores at Blair, so she sees familiar faces throughout the halls.

In her own sophomore year of high school, Reddicks moved to Bremerhaven, Germany with her family because her father was stationed there by the United States Military. She attended and graduated high school in Bremerhaven, and her first two years of college at the University of Maryland, Munich campus, in Munich, Germany.

One of the many interesting experiences that she had living abroad was participating as lead vocalist for a German record. After performing in church and school choir for much of her young life, Reddicks was recruited by a German band in dire need of an American vocalist for their album. "I think the single was called 'YEAH! Turn Up the Light.' I usually keep it in my car, and I have the CD and the record," she explains. Upon returning to the United States, Reddicks completed her Bachelor of Arts Degree in Telecommunications at Morgan State University, where she also sang in the choir. 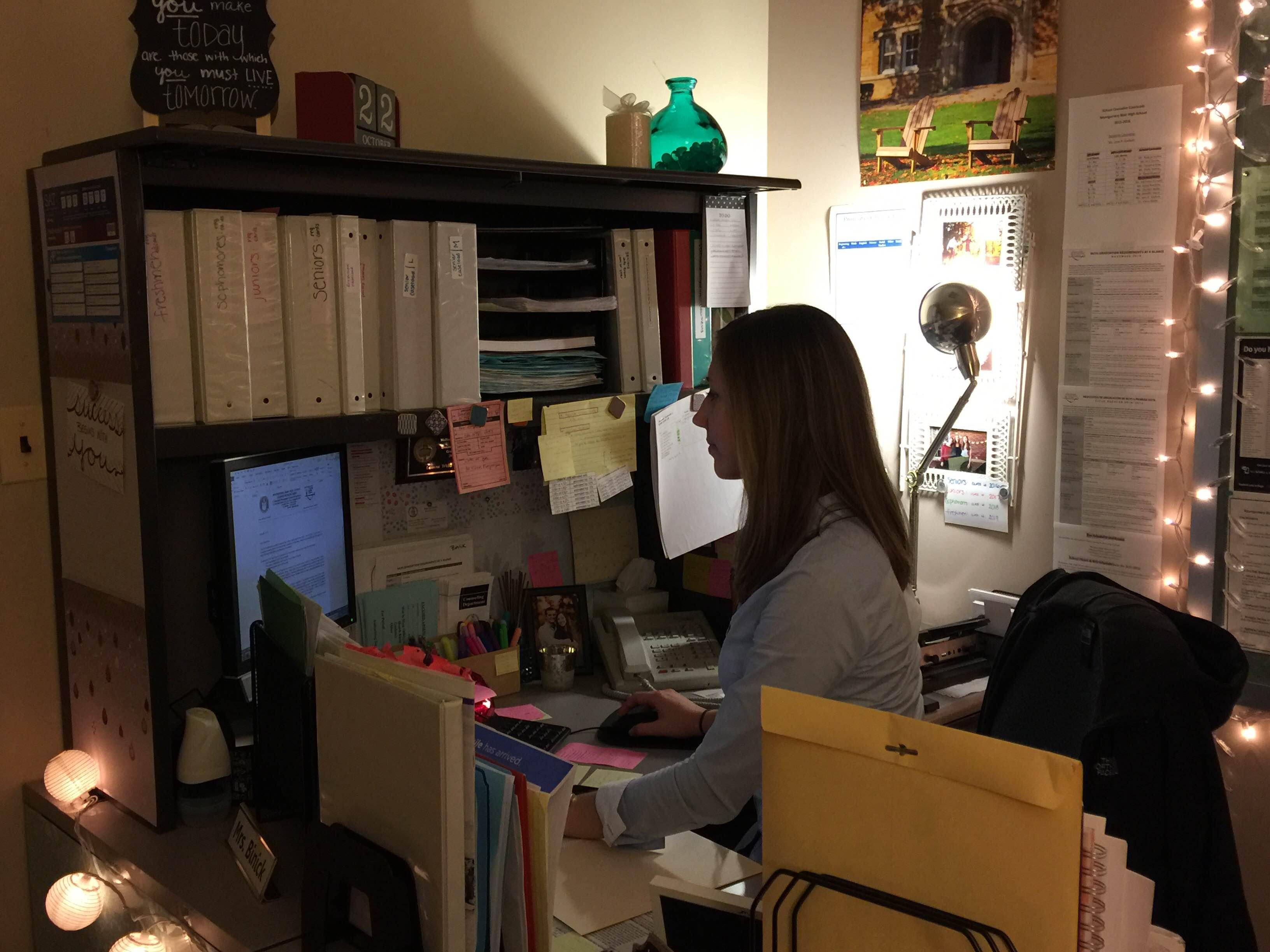 Photo: Mrs. Binick can usually be found hard at work in her office in the counseling department

Photo: Mrs. Binick can usually be found hard at work in her office in the counseling department

Binick, Reddicks' neighbor down the hall, grew up in Carroll County, and has lived in Maryland her whole life. Binick completed her undergraduate degree at McDaniel College where she majored in philosophy and Spanish. She was also an active member in both the philosophy and Spanish clubs outside of her classes and a part of the Honors program, which led her to participate in various academic activities. "Outside of school, I did mostly academic stuff. I kind of got my nerd on," she says with a chuckle.

Deciding to stay at McDaniel for her graduate program, Binick worked as a substitute teacher as a graduate assistant working with students with learning disabilities, and as a school counseling intern at a Carroll County high school. "Partly through those experiences, I realized that I really liked connecting with people, and I'm pretty good at it,” Binick smiles. She graduated with her degree in school counseling and Blair took her on soon after.

Outside of her academic achievements and career as a high school counselor, Binick loves music and the outdoors. Some of her favorite singers are Michael Buble and Ben Rector. She frequents the beach and hiking trails during the summer. "The winter is tough on me. I sure do love that sunshine," she comments.

More than anything, though, Binick loves hanging out with her friends and family. She got married in May, and lives with her husband in Howard County. "I'm really social, and a big extrovert. If I don't have time with my friends at least a few times each week, it really puts a damper on things," Binick explains. This is part of what drove her to become a school counselor. "My favorite part of the job is just being with the students, getting to know the students, and helping them move forward in life," Binick says.

Binick has loved everything about Blair in her first year on the job. She is appreciative of the huge support system in place that constantly encourages her to succeed, especially given that her to-do list is just as long as it was at the beginning of the year. "I'm really busy all the time, but I really thrive on that," Binick says. So far her favorite part of the job has been getting to know the student body. "It's been really cool to be a part of their process, their journey at Blair, and helping them figure things out," she smiles.

Reddicks' mother worked as a schoolteacher in Germany, which is one of the reasons she eventually settled on education as a career. "Connecting with people and with students has always been one of my strengths, which is what led me to counseling," she explains. Growing up watching her mother teach, Reddicks initially thought she would follow suit, but later changed her mind. "I decided that counseling really followed my strengths, which are getting to know people and working through things one on one, which I'm really looking forward to doing here at Blair," Reddicks says.

Having worked largely with middle school students up to this point, Reddicks is excited about being a high school counselor. "It's great connecting with older students. I can really talk to you guys more like adults, and it's great preparing for your next move out of high school," she quips with a smile.

Reddicks has had the same welcoming experience at Blair as Binick. "Everyone's been really friendly, which is impressive given the size of the school. To me, it kind of feels like a city or a mall more than anything else." Students and staff alike have been helpful in getting Reddicks acclimated to the Blair culture. "I stay busy, and that's what's to be expected. I'm just looking forward to what's next," Reddicks says.

The Blair community has gained two new counselors this year in Leanna Binick and Antia Reddicks, but more importantly it has gained two people who love their jobs, are good at what they do, and are looking forward to talking Blazers through their problems and helping them achieve their goals in high school and beyond.