Seniors Matt McCutchen and Brian Lawrence were named finalists in the annual Intel Science Talent Search (STS). They were among 40 students from high schools across the nation to advance from the semi-finalist level in the research competition.

The competition is an optional part of the Research Project class, a two-semester Magnet elective beginning the second semester of junior year and ending with the first semester of senior year. The students take part in a research internship over the summer between the two semesters and write a final paper that they may choose to submit to different competitions. 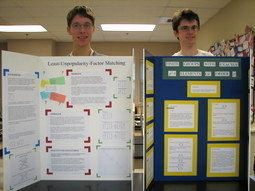 In addition to the $1,000 received for reaching the semi-finalist level, McCutchen and Lawrence will receive checks for $5,000, an Intel laptop and an all-expense-paid trip to Washington D.C. in March for the final judging of the projects. The judging session will lead to the rankings of the top ten projects, with a grand prize of $100,000 in scholarship money.

The announcement of the winners was a pleasant surprise for McCutchen. "I was happy to be a semi-finalist, and being a finalist is nice," said McCutchen, shortly after learning of his advancement in the competition.

This year's 12 semi-finalists all spent numerous hours over their summer break to produce professional-quality research papers. The selection of finalists was probably one of the closest in years, said Mccutchen. "They probably all deserved it as much as me," he said. "And who is to say whether a math project is better than a science project?"

Blair students have been successful on the Intel scene ever since the competition was introduced in the Research Project class. The school has never witnessed a year with fewer than two finalists, many of whom placed in the final March judging. Last year, Chelsea Zhang, a 2006 alumna, placed third in the nation with her project in 2006.