Two singers are better than one

The 52nd Annual Grammy Awards gave viewers fashion, fame and talent in a three-and-a-half hour broadcast last week. From country to rock to hip-hop, the Grammys delivered music's biggest stars, and those stars aligned in stellar collaborative performances. No matter the combination of musicians, these performances were exciting, moving and certainly the best moments of the evening. 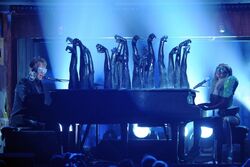 Lady Gaga and Sir Elton John at the Grammys

Lady Gaga kicked off the broadcast the only way she knows how: weirdly. Despite the odd setting and creative dialogue, the most exciting part of Gaga's show was when she emerged on stage after being thrown into a fire pit. Sitting across from Lady Gaga on a double-Grand piano decorated with severed arms, peering at her out of diamond-covered glasses was Sir Elton John.

Gaga and John flawlessly performed a mash-up of "Speechless," a song from the former's 2009 delux album "The Fame Monster" and "Your Song," one of Elton John's biggest hits. Their voices and piano playing blended spectacularly and the two artists set the bar for the rest of the show.

Drummer Travis Barker, of Blink-182, joined rappers Drake, Lil Wayne and Eminem for an energized rendition of Drake's hit "Forever." Supported by Barker's passionate drumming, the rappers gave viewers an inspiring and dance-inducing performance that reminded us of Eminem from a few years ago. The collaboration showed us Drake's potential and further asserted Lil Wayne's dominance in the hip-hop world.

From the rock genre, Green Day performed their popular song "21 Guns" with the help of the full Broadway cast of the new musical "American Idiot," a show based on Green Day's biggest hits. The cast made the song seem as though it was meant to be a chorus number; "21 Guns" is much more poignant when sung by an ensemble of voices.

Zac Brown Band also used gorgeous harmonies and showed stunning musicianship in their performances of "America the Beautiful" and the band's hit "Chicken Fried," accompanied by the legendary rock and country musician Leon Russell. But the most noteworthy legend honored on Sunday with a performance was, of course, Michael Jackson.

Jennifer Hudson, Usher, Celine Dion, Carrie Underwood and Smokey Robinson all sang along with a recording of Jackson's "Earth Song." The performance was visually beautiful (though 3D glasses would have been nice) and Jackson's powerful voice was certainly honored by his co-collaborators' talents. Dion and Robinson have already proved that they're worthy of honoring Michael Jackson and the three younger singers certainly contributed their fair share.

In another moving performance, Mary J. Blige and Andrea Bocelli sang "Bridge Over Troubled Water" in an emotionally charged performance that showed the music industry's support for the devastated Haiti.

The collaborative performances undoubtedly made this year's Grammys memorable. The combination of artists was original and added spice to an otherwise routine awards show - it also provided some of the most creative and awesome moments of the broadcast.

But among the cluster of marvelous collaborations on Sunday, one performance rose above the rest. In a dramatic and commanding performance, one dynamic duo raised the stakes for Grammy performances yet to come: Beyoncé and Sasha Fierce ruled the Grammy stage.