Two female Blair students were involved in a three-car accident this morning before school when they were attempting to make a left turn into the student parking lot, according to assistant principal Suzanne Harvey. The students, a junior and a senior, were transported to the hospital immediately after the accident.

"Two girls were turning on an arrow off of University [Blvd.] into student parking," said assistant principal Linda Wanner, who did not witness the accidents but spoke with the girls at the hospital. Harvey received a call from the main office shortly thereafter and was one of the first Blair administrators on the scene, according to Wanner. 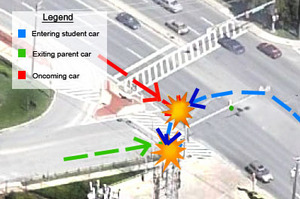 Photo: Graphic of car crash in the student parking lot. Image of intersection and copyright property of Microsoft Live Local.

Photo: Graphic of car crash in the student parking lot. Image of intersection and copyright property of Microsoft Live Local.

The car with the students sustained front- and side-end damage, according to Harvey. Wanner said that the car was not damaged on the passenger side, but its windshield was broken. Harvey said that the other two cars involved suffered front-end damage.

Harvey said that two police squad cars, three security personnel, a fire truck and an ambulance arrived soon after the accident occurred. Security assistant Jose Segura was one of the security personnel who arrived on the scene. "When I was doing my rounds, I saw a fire truck and an ambulance respond," he said. "I collected IDs from them, and I contacted administration."

According to Wanner, the students are just bruised and sore. "One had a banged up knee, and the sore ribs. They were X-rayed, and nothing is broken," she said. According to Harvey, the people in the other two cars were not sent to the hospital.