This is not original reporting. All information has been compiled from the Washington Post, the Washington Examiner and the Baltimore Sun. Silver Chips Online posts this news summary to provide readers with a forum for discussion.

State officials reported today that they have identified two more probable cases of H1N1 (swine) flu in Montgomery County, bringing the total number of likely state cases to nine. One of these cases is a 53-year-old World Bank executive from Montgomery County who recently traveled to Mexico and the other is a student at Rockville High School. County officials have closed the high school until further notice to investigate the case. 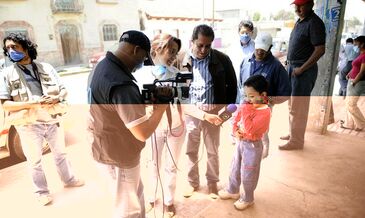 Photo: Five-year-old Edgar Enrique Hernandez, who got sick in late March, is the earliest confirmed case of the swine flu virus in Mexico. Picture courtesy of the Washington Post.

Photo: Five-year-old Edgar Enrique Hernandez, who got sick in late March, is the earliest confirmed case of the swine flu virus in Mexico. Picture courtesy of the Washington Post.

County officials have responded to the cases of swine flu by encouraging residents to help stop the spread of illness by washing hands frequently and staying home from work, school or other public places if sick. "I want to assure everyone that we are doing everything we can at the present time and we will continue to respond as the situation unfolds," Montgomery County Health Officer Dr. Ulder J. Tillman said in a press release yesterday. "We are also working closely with the Montgomery County Public Schools on necessary precautions." Although Rockville High School is the first school in the Washington area shut down because of the potential pandemic, hundreds of other U.S. schools have closed their doors in an effort to stop the spread of the virus, which is believed to have originated in Mexico.

The World Bank executive is reportedly married to a Takoma Park Elementary School teacher and the father of two public school students, according to school officials. The county asked the executive's family members to stay at home yesterday and notified parents at the family's three schools - Takoma Park Elementary School, Westland Middle School and Albert Einstein High School - about the possible connection to swine flu. These schools have remained open and school officials said there is little risk because neither the teacher nor her children has showed any flu symptoms.

In addition to the two Montgomery cases announced yesterday, local authorities said a 40-year-old woman from Baltimore County has probably been infected. The new cases have been sent to the Centers for Disease Control and Prevention (CDC) in Atlanta for confirmation.

The three new probable cases come after news on Wednesday that six Maryland residents - including two school-aged children - had contracted the illness, though none were hospitalized. All had links to people who had traveled to Mexico. The children attended Folger McKinsey Elementary School in Severna Park and Milford Mill Academy in southwestern Baltimore County. Federal and state officials have identified more than 130 cases in 17 states thus far.

The definition of a "probable" case is an individual with flu-like symptoms who has a recent history of travel to an area affected by swine flu or contact with a known case and has had preliminary testing suggestive of a novel virus that needs further confirmation, according to Tillman. According to the CDC, swine flu is a respiratory disease of pigs that is caused by type A influenza virus. The symptoms of swine flu are to be similar to the symptoms of regular human seasonal influenza and include fever, lethargy, lack of appetite and coughing. Swine influenza viruses are not transmitted by food, but are spread through coughing or sneezing of people infected with the virus.

Residents with questions and concerns about the swine flu can call a new public information line at (240) 777-4200, staffed by the Montgomery County's Department of Health and Human Services. Health workers will answer calls from 8 a.m. - 5 p.m. each weekday until the phone line is no longer needed.