Five very different women sit it front a window, each wearing a strikingly similar, hideously ugly salmon and azure dress. Each shoots a different glare at the unseen Tommy Valentine, a known womanizer and dreadful scoundrel. Although ability and drive is required to pull off this multifarious play and do it justice, the Pine Players acting troupe achieves just that in their production of Alan Ball's "Five Women Wearing the Same Dress." 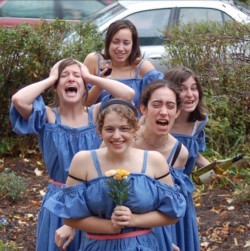 Originally written in 1993, "Five Women" chronicles a day in the life of five bridesmaids as they hide out in a bedroom that overlooks the wedding that they are supposed to be attending. They begin to wonder about the bride, their own lives and a certain seducer that connects them all. Directed by Duke Ellington School of the Arts junior Sam Lahne, the play carefully peels back layers on serious issues such as homosexuality, addictions of all varieties and religion. Ball is not afraid to push his characters to, and often over the edge, of control and reason, and the Pine Players' skills in achieving this light may actually disturb the audience.

The play opens with a strong female voice singing as the characters try to make the repulsive dress, a recurring theme through the play, somehow complement their bodies. Each is focused on by a single light in turn on the otherwise dark stage. As the wedding day progresses, each will try to retreat to the relative safety of the bride's sister's bedroom, finding solace from love's pains and nagging relatives through copious amounts of smoking, reminiscing about the past times and one another's company.

There is no central character – all five of the women are portrayed as integral to completing and watching the play. There is Georgeanne (senior Robin Kameras), the discontentedly married former best friend of the bride who seeks to relieve her distress through a quick tryst with an old lover, the fatal Valentine. Unforgettable is the rendition of Meredith, (junior Maile Zox,) "the little sister" who is a disturbed neurotic person, harboring more secrets than any of her fellow bridesmaids can even imagine. She often wrestles with her dress, the one that makes her look like "a hooker from the Twilight Zone," and yells at her mother. Surrounded by a cloud of tobacco, the chain smoking, clumsy, lesbian Mindy (senior Ellie d'Eustachio) is easily recognizable as she stumbles her way to and fro with a cigarette clenched between her fingers. Mindy's tendencies are the object of hushed talk among the other women in the play, each bleakly aware of her own shortcomings as they try to cram her thin body and carefree manner into the typical homosexual stereotype.

The play's lighting work, done by Lahne, is sparse, but used well. An overall wash of light covers the majority of the stage, leaving it isolated from the audience in an island of the refuge for the characters and away from the torrent of guests and discomfort that they would encounter amid the other guests at the wedding. A great deal of the play's fluidity is due to the set, also designed by Lahne. The set offers actors a chance to lean on, play with and hide behind the bedroom's many articles and furniture, which is a departure from the conventionally barer and modern play.

Innocent from the sin is Frances (junior Sarah Rothman), the Christian girl who, amid her older, more experienced and worldly fellow bridesmaids, keeps to her religious beliefs and only slightly derails them for a cute bartender. Her perfect foil is the audacious, sexually liberal Trisha (Bethesda Chevy Chase senior Zoe Cohen), who often spars with Frances on the topics of God and sex. A minor but important role is Tripp (senior Zach Eaton), Trisha's love interest, who is a younger man with an even younger mind.

The play flows smoothly through its hour and a half slot. Under Lahne's direction, the actors often improvise and mingle lines, which add a natural feel to the production. Each actor becomes their character seamlessly, down to small details like postures and mannerisms, such as fidgeting with their dresses. The costumes were designed and created by d'Eustachio, fully capturing the nightmares of any bridesmaid: puffy blue and strangely offset lace trim.

The Pine Players are donating all proceeds of the pay-what-you-can show to the Bread For the City fund. "Five Women Wearing the Same Dress" remains a charming play about the many tastes people have in life, the many flavors they are handed and most importantly, how they deal with it.