Why civil forfeiture is an unfair and unjust program

Close your eyes. Imagine a world where police can take what they want from civilians. Where they can prosecute for crimes that haven't been committed. Where they accuse objects of crimes instead of people. Where no one knows enough about this to put a stop to it. Now open your eyes. Unfortunately, this is already a reality. Civil forfeiture is a law that allows the police to do all of the above, and it needs to be stopped. It is an unfair system that needs serious reformation in order to fulfill its intended purpose and actually help the American people.

Civil asset forfeiture was put into place by the Equitable Sharing program. It is a law that allows police to seize money or possessions from civilians if they suspect those goods will be or could be used in a crime. It was established during the drug war hype thirty years ago, and grew especially prevalent after 9/11. And it has helped expose drug traffickers and locate stolen money. But more and more, police have been using it to confiscate smaller sums of money for suspected cases of "other laws, such as prostitution, shoplifting, or even legal activities," according to one Washington Post

that "those laws were meant to take a guy out for selling $1 million in cocaine or who was trying to launder large amounts of money. It was never meant for a street cop to take a few thousand dollars from a driver by the side of the road." But as the system has continued, unchecked, that is very quickly what it is becoming. Police are allowed to seize anything if they suspect that it could be used in a crime, and even then they don't have to prove it. Your evidence is considered guilty until proven innocent, and it is extremely hard to prove that it's innocent.

There is an appeals process, but as the Washington Post found, only one-sixth of seizures are ever contested, and only in 41 percent of those cases are people allowed to actually take their stuff back. Perhaps this is because they first have to pay a 10 percent bond for their things and then hire an attorney, which can cost hundreds of thousands of dollars. Even if you do manage it, the trial is often held in a tiny courtroom without a judge, so you're basically just arguing with the cops that took your stuff. People who have tried to get their things back have still had irreversible damage to their lives, losing businesses, property claims and thousands of dollars. There can be no way to justify a system that does not even allow for basic justice. 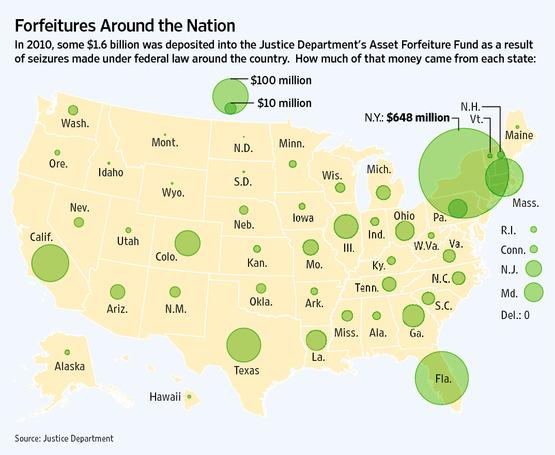 This system also seems to unfairly target people of color. Although the Department of Justice has released no information about race in connection to civil forfeiture, the Washington Post found that the majority of people whose belongings were seized were racial minorities. This is hardly surprising, what with rampant racism in most police forces as exposed by Ferguson, but it's still something important to acknowledge. If they're going to impose this irrational and unfair system on the American public, the least they could do is to make it affect every American equally.

Maybe we could ignore this, because it's not so different from the other police issues that we're ignoring. We should deal with police brutality first, and the corruption later. But civil forfeiture only gets worse. You may think that the money confiscated gets stored somewhere, so it might be returned one day, but there are actually no guidelines about how they use it. Many police departments rely on confiscated money to help fund their department or pay people's salaries. "[The police] saw this as a way to provide equipment and training for their guys. If you seized large amounts of cash, that's the gift that keeps on giving," said former U.S. Drug Enforcement Administration agent Steven Peterson in the Post article. There are plenty of other, less morally grey ways to attain funding, even in tight times. The Police can rely on taxes, for example, which takes money from citizens in a totally legal and actually fair way. But some departments don't even use the funding for real purposes. As John Oliver reported, civil forfeiture money has gone to the purchase of a police department Zamboni and even a margarita machine, which, as Oliver points out, makes it a literal slush fund.

There are very few things in the world to be optimistic about. Global warming, for example. Or perhaps the ever-worsening police system that exists in our country. While Ferguson and similar cases expose injustices, this exposure only lasts for a little while before people decide to ignore it. Unfortunately, as any person in a horror movie knows, ignoring a problem will only make it more likely that that problem will later eat you. We needs to confront the corruption in police before it destroys our society. The Justice Department is planning to look into the Equitable Sharing program, but the concept of civil forfeiture either needs extreme limitations or complete eradication. It will be a small step to a completely fair police system, but an important one nonetheless.