"Underclassman” fails to make the grade

"Underclassman," starring Nick Cannon, is exactly what it aims to be —
an underdeveloped, generic comedy aimed at a teen audience with extremely low expectations. Most of the movies coming out of Hollywood today, especially the comedies, are terrible, but people go see them anyway.

Cannon's latest role in "Underclassman" is similar to both Vin Diesel's role in "The Pacifier" and Arnold Schwarzenegger's role in "Kindergarten Cop," both of whom go undercover, as a baby sitter and kindergarten teacher, respectively, to solve a crime. The only difference is that in "Underclassman," Nick Cannon goes undercover pretending to be what he really is — an immature, conceited kid. 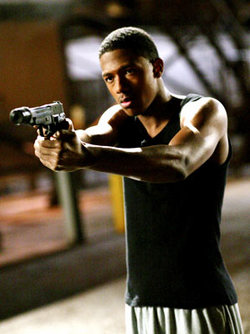 The movie takes place in Los Angeles, with Cannon playing Tracy Stokes, a street cop who is eager to become a detective. Stokes does not have a great record, but police chief Victor Delgado, played by Cheech Marin, promised Stokes's father he would look after him. So Stokes has managed to stay on the force. Frequent references to Stokes's relationship with his late father, a legendary cop, manifest a lame attempt at giving the movie a sentimental touch.

Stokes is assigned to investigate a student's death at one of Los Angeles's upper-class private schools. Stokes acts as a student to befriend the main suspect. While undercover, he falls for his Spanish teacher, played by Roselyn Sanchez. He also manages to excel on the school's street basketball team and even earns his high school diploma.

Stokes's relationship with Police Chief Delgado is probably a metaphor for Cannon's relationship with the producers of this film. They keep placing faith in Cannon hoping that eventually he will shine. Although Stokes makes the police chief proud by the end of the film, Cannon's acting lets down both his producers and his fans.

Yes, "Underclassman" has some cool gun fights and car chases, but not enough to save the film. The movie is too generic and the script too poorly written. It's hard to tell whether Cannon's acting is to blame — given a new script and a better plot, he might have done fine. But given the fact that Cannon wrote, produced and starred in "Underclassman," maybe he just isn't as funny as he thinks he is.

If you're looking for a quality film, or even an okay comedy, this movie is not for you. But if you're willing to settle for a couple of good lines and a few good action scenes, you might actually enjoy "Underclassman."