Underground sport on the rise

Junior Aaron Kozloff zeroes in on the 13-foot wall before him. His eyes strain towards the obstacle and he hesitates momentarily. With a final resolve, Kozloff runs up the barrier in order to vault himself over the top ledge, but narrowly misses. "Only half-an-inch more," the four others surrounding him say encouragingly.

Kozloff was at a community-based parkour jam last month in Washington, D.C., where around 10 participants displayed their wall-jumping, rolling and other abilities in open air. Parkour, which originated in France a decade ago and is now widespread across Western Europe, is defined as the art of displacement, according to Kozloff. Part art form, part sport, parkour requires enthusiasts to use skills like vaulting, jumping and rolling to move from one place to another.

Originally created to be a recreational activity, parkour is developing more practical uses with the U.S. military as its popularity as a sport is expanding as well, according to Jesse Woody, a trainer at Primal Fitness, a parkour gym in Washington D.C. Kozloff himself is part of a small, but growing parkour population in the D.C. area.

Before the end of his sophomore year, Kozloff watched several YouTube videos of parkour and was attracted to the fact that people of all physical ability can be traceurs - doers of the sport. "You don't have to be very big to do it," he says, commenting on his small physical stature. But for Kozloff, the sport's ultimate appeal comes from its free nature - he has long embraced the idea of a no-rules physical activity. "When I was a little kid, I used to run around and jump on things," he says.

Sophomore Jonathan Lockwood also found an interest in parkour-style activities at an early age, when he often competed against his older brother in jumping over objects. While Lockwood is a more casual participant than Kozloff, he feels that parkour has given him an outlet for his free-will-inspired playtime - it has enabled him to see the world in a different light. "I love parkour because it gets you to feel out your surroundings," he says. "Instead of idly walking by buildings or alleys, you attach meanings to them."

Mark Toorock, another trainer at Primal Fitness, follows a physical philosophy dedicated to producing safe and fit traceurs. Like Lockwood, he says that humans have an innate desire to move without any impediments. "Human beings love to see other human beings move who are graceful [and] natural," he says. "It's the basic form of beauty. There's nothing contrived." 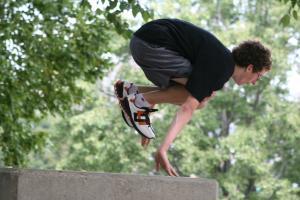 According to Toorock, Primal Fitness has trained since its inception roughly 100 parkour fans from various demographics and skill levels — including Kozloff, who started his own basic traceur training at the gym. Primal Fitness, hidden in a quiet corner of Washington, D.C. near Capitol Hill, appears grim from its high ceilings and gray walls. Essentially a large expanse of area, the gym gives trainees the room and equipment needed for intensive training. In this setting, the first thing Kozloff learned during his six-week intensive course was how to land jumps in a way that reduces impact on the knees and joints. The traceur boot camp also included jumping and rolling techniques that are stressed for beginners during the first two weeks.

Despite some fancy footwork introduced in the course, Toorock ultimately believes that beginners should spend more time conditioning the body rather than learning parkour. "Don't look at YouTube," Toorock says, stressing his concern that unqualified beginners will mimic stunts they see on the Internet. "Find out if the traceur stresses safety and the basics."

Lockwood is a living example of the reason behind Toorock's "Don't try this at home," philosophy. A few months ago, he left Primal Fitness after only one class because he could not afford to pay for the full course, choosing instead to learn techniques from YouTube videos. His stunts proved dangerous when he ran up the walls of the Blair wrestling room just as someone turned out the lights. Instead of landing like he expected, Lockwood hit his head on a protruded corner of the wall, causing a laceration down to his skull. Coming out of this incident with no long-term effects, Lockwood insists that he knows his limits. "I find it no coincidence that the only time I hurt myself badly was when someone else interfered," he says. 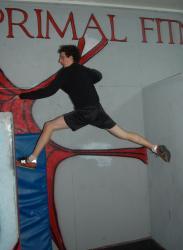 Photo: Junior Aaron Kozloff gracefully leaps from one wall to another.

Photo: Junior Aaron Kozloff gracefully leaps from one wall to another.

In addition to training avid and safe traceurs at his gym to avoid accidents like Lockwood's, Toorock also organizes a regional parkour community, called American Parkour, where beginners and advanced traceurs alike can organize jams like the one Kozloff attended several weeks ago. Through these community-sponsored jams, parkour acquires new followers.

Due to other commitments, neither Lockwood nor Kozloff intend to pursue parkour seriously at this time. However, Kozloff actively participates in parkour community-sponsored events. And while a key component of parkour is just having fun and being healthy, it is also becoming a useful activity for the military, as the sport is similar to the movement and utility in martial arts. In fact, parkour founder David Belle incorporated many techniques he derived from his training in martial arts, gymnastics, climbing and the military into his own discipline, according to Woody.

Woody works with CrossFit to train military personnel across the United States in parkour. He once trained 30 Marines at Fort Meade along with police, Metro transit security and secret service agents. The reach of parkour in the United States is quickly expanding from an "underground" sport to an "undercover" tool. "It was a game, but at the same time, there should be service to other people," Woody says.