Uneasiness is a warm gun

After Trayvon Martin was shot and killed on Feb. 26, people all over the country were in a frenzy in protest of the shooting. George Zimmerman, a member of his community's neighborhood watch, was walking around his Florida neighborhood when he saw Martin, 17, and decided that Martin looked suspicious enough for Zimmerman call the police. Even though the police told him not to follow Martin or to take any action, Zimmerman disobeyed the order and shot Martin in cold blood. 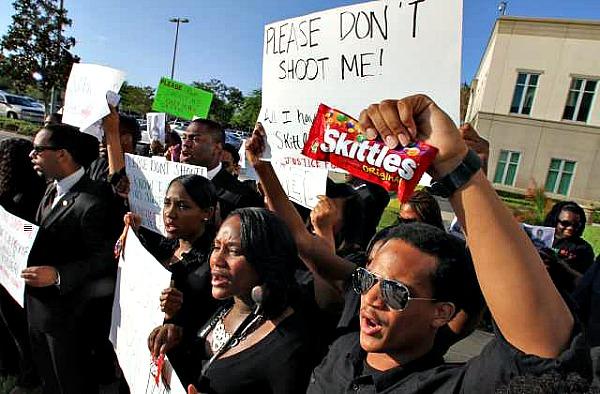 Photo: People came out to protest the unjust shooting, with Skittles as a symbol of the tragic issue.

Photo: People came out to protest the unjust shooting, with Skittles as a symbol of the tragic issue.

Claims of self-defense are weak since Martin, who was just a kid, was on the phone with his girlfriend and was only armed with a pack of Skittles and an iced tea. People all over the country have been protesting that it was an act based on racial discrimination or hostility towards teenagers. But whatever motivation may have been behind Zimmerman's actions, Martin didn't deserve to have his life cut short.

People are focusing on Zimmerman's arrest and the legality of the whole issue, which should be done in any crime of this sort, but many are missing the big picture: why was he so scared of Martin that he felt the need to shoot?

From every description of the 911 calls and what was found in Martin's possession, there's no logical reason for why Trayvon would have been perceived as any kind of threat. Despite having equal rights and despite having a black president, a black teenager wearing a hoodie was seemingly enough to scare an adult man. Sure, the

With so much media attention about the incident, our country has been given another chance to reevaluate whether our fears of others are irrational and how stereotypes and generalizations can be deeply engrained in people's minds, even in the year 2012.

Whether we want to admit it or not, whether the thought is conscious or not, racism is still alive and well. Though it is a tragic situation, Martin's death can be viewed as an example of the issues our country still needs to resolve. The discussion shouldn't revolve solely around who's right and who's wrong or how much time Zimmerman should serve, but around erasing the fear of an outdated stereotype.