United States makes a wise donation to WHO

In a surge of global responsibility and strategic injection of diplomacy, the United States plans to donate 10 percent of swine influenza vaccinations to the World Health Organization (WHO). The United States has a current order of 195 million doses of the H1N1 vaccination that will start to arrive in October, according to the Washington Post. However, the White House has not released details as to the total amount to be donated. 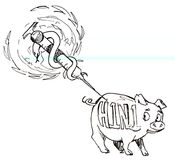 Photo:
As usual, the beginning of the fall season and the school year marks an intense effort by government officials and health organizations to contain the spread of the virus as much as possible. Although not more harmful than the typical, seasonal influenza, swine flu caused an initial panic that eclipsed the media and fears of people worldwide. In addition, WHO assigned a high alert level for the flu. During June 2009, WHO categorized the pandemic to Phase Six, which means widespread human infection.

Swine flu could infect up to 50 percent of the U.S. population and potentially kill 90,000, which is more than twice the number of deaths related to the common seasonal flu according to estimates concluded by a presidential panel. However, some medical experts pen this as worst-case scenario, and the White House "remains confident that the United States will have sufficient doses of the vaccine to ensure that every American who wants a vaccine is able to receive one."

Health and Human Services (HHS), the federal agency responsible for protecting Americans health and providing essential services, has been very proactive in the states in warning Americans and setting guidelines to deal with those showing flu-like symptoms. Even President Obama has spoken for everyone, ranging from school officials, students and parents to all make a concerted effort in combating this flu.

Now, the United States is also moving towards helping other nations in dealing with the flu. The U.S.'s decision to donate vaccinations to WHO follows in line with the acts of several other nations including France, Norway, Australia and Italy. When many of the world leaders fault the U.S. for being behind in issues related to health care, this sizeable donation of vaccines exemplifies America's commitment to supporting the underprivileged countries of the world.

Like many of the wealthy countries, the U.S. can still provide for the nation's children and elderly, who are the ones to be most likely affected. By acknowledging poorer nations with less means to safeguard their citizens, the U.S. is making a bold response to those who may criticize our world interaction and moral stewardship.