The misnomer of Senior Unity Day

Four years. 628 students. And plenty of cliques. Those are the numbers that make up the 2014 Montgomery Blair senior class. We came to Blair as wide-eyed freshmen in the fall of 2010 and are going to leave as older, more mature (for the most part) young adults. As we get set to go our separate ways into the real world, senior year and events like Senior Unity Day are meant for us to look back at our four-year journey and come together for our final semesters of high school. We yell "1-4" wherever we go and ridicule the underclassmen together because we're the oldest in the school, but are we truly united? This is a question in all high schools, but, nonetheless, we are not.

All 628 seniors came from various middle schools – Takoma Park, Silver Spring International (SSI) and Eastern to name a few of the main ones – and largely these same groups of friends from sixth to eighth grade stick together throughout high school. The circle may slightly widen, restrict and fluctuate over the course of four years as friendships form, reform and disintegrate, but for the most part, friend groups stay relatively similar. The location may have changed but the relationships remain the same. Groups that attended Takoma Park Middle School together hang out together; the same goes for the kids who went to SSI, Eastern and so on. And to further divide the school, the fact that a group of people went to the same school doesn't necessarily mean they are part of the same collection of friends. Two groups may have attended the same middle school yet only hang around with their respective crowd, deepening the divisions even more. 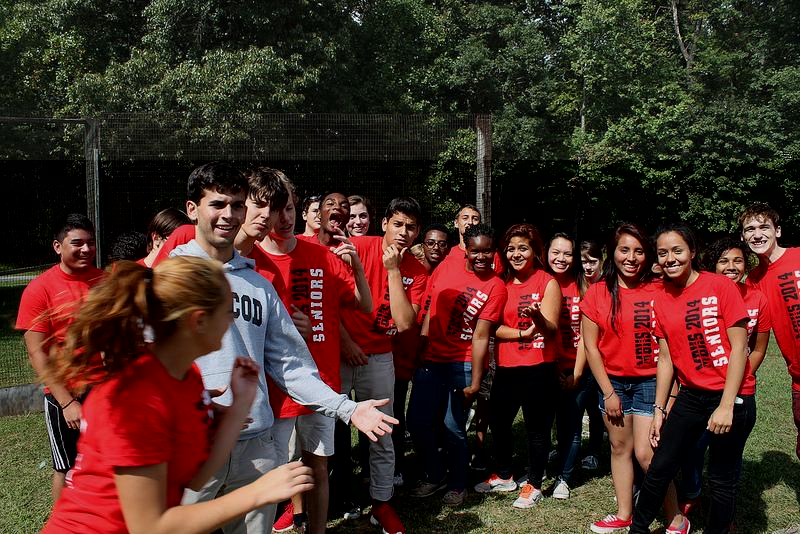 Photo: For a few hours, Blazers put aside their normal social affiliations to participate in Senior Unity Day.

To be fair, there is some mixing between groups of different middle schools. However, that is the byproduct of another factor more serious than middle school allegiances: race and ethnicity. While providing social commentary about race on a relatively minor issue like high school social lives is not my purpose, I do think that it's human nature to associate with people like ourselves. When we are comfortable with ourselves, we would rather be around people we believe are similar to us in respect to beliefs, culture and interests. Like it or not, race plays a factor in each one of the aforementioned criteria as many of our values, likes and dislikes stem from whether we are black, white, etc. Also, many of the interests we have are related to the environment and upbringing we are exposed to, specifically the home where ethnicity is the most common and binding factor.

According to a study by J. Philippe Rushton and Trudy Ann Bons of the University of Western Ontario (website), our spouses and best friends are about as similar to ourselves as our siblings. The study, which was conducted and published by Psychological Science journal in 2005, even went as far as to state that our preferences are partly due to our genes (34 percent due in this experiment). The research also showed that 12 percent of the people's preference was the result of a common environment.

It isn't a stretch to assert that Blair is fairly self segregated, especially along the lines of race. Just take a quick look around the school: many of the black students hang out with each other; many of the white students interact with other white students; and the pattern continues for every other group. Of course, this isn't only an issue at Blair, but it contributes to an ever-fracturing senior class.

And to further complicate the web of social alliances, extracurriculars enter the fray. However, it is not just the stereotypical labels of "jocks," "cheerleaders" and "nerds"; to their credit, the groups are more intricate than those broad tags. Football players stick together while the basketball team prefers to spend their time collectively. The same applies to both poms and cheerleading, and all these different groups help splinter the school.

As for Senior Unity Day, it would seem that this event is the evidence that that derails my argument. On this day, most seniors come together to participate in the various activities provided at Smokey Glen farm. It's one of the few, and last, occasions where the entire senior class is collectively assembled, and it's meant to be a celebration of our four years together. Surely this event displays our willingness to have fun together, regardless of middle school alliances, ethnic association or athletic membership, right? No, I'm not buying it.

Photo: Senior Unity Day is no doubt a good time for everyone, but is it a misnomer?

Photo: Senior Unity Day is no doubt a good time for everyone, but is it a misnomer? Photo courtesy of Grace Wilson.

While Senior Unity Day is enjoyable and should not be abandoned simply because of high school social status, it proves little to the skeptics. One day out of 700 displays, at best, our ability to put social status aside for just a few hours. When there's free food, unlimited drinks and a mass of people participating in animated games of volleyball, it's easy to forget our regular affiliations for a few hours.

But this is not an indictment of any group or individual for their choice of friends. I believe it's simply human nature to gravitate towards certain people and stick to them. We like who we like and selecting friends appears to be an instinctual process. The problem is once groups are formed, it seems hard for anyone else to be accepted, and instead people are resistant to any change in their social lives. With that being said, we should not continue to fall for the façade of a united senior class. We've all had to go through our shares of hardship with this senior class: fights, damaged relationships, bullying, and a whole lot more. United? Definitely not. In fact, we are far from it and to believe in the contrary would be beyond naive. While Senior Unity Day has pure intentions, it's a sad, erroneous portrayal of the realities of high school.