All University of Maryland (UMD) campuses are expected to implement a three percent tuition increase for both in-state and out-of-state undergraduate students entering the university this fall. The increase marks an end to a tuition freeze Governor Martin O'Malley established in Fiscal Year 2007. 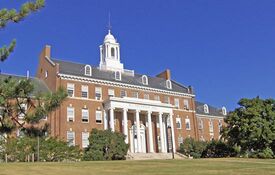 Photo: UMD will receive an estimated $10.3 million from the tuition increase.

Photo: UMD will receive an estimated $10.3 million from the tuition increase.

The change forces in-state students to pay $197 more each year, while out-of-state students must pay an additional $675. UMD will receive an estimated $10.3 million from the tuition increase, according to Director of Budget and Fiscal Analysis John Blair.

Each year, the UMD budget staff tallies total estimated costs and proposes tuition increase rates to O'Malley, who decides how much state funding he can provide to offset at least a portion of the budget shortfall. In the past few years, O'Malley has waived tuition increases and allocated state money to cover increasing operational costs.

Due to rising expenses, UMD proposed a tuition rate increase from the four percent requested last year to five percent for this fall's term. "We have certain mandatory costs," Blair said. "Every year they go up some. We have to cover those additional expenses." This year, O'Malley could not commit an allowance that matched the expected amount generated by the tuition increase. "The governor gave us enough money to reduce it to three percent," Blair said.

Photo: A tuition freeze for the University of Maryland has been in effect since 2007 but will come to an end this fall.

Photo: A tuition freeze for the University of Maryland has been in effect since 2007 but will come to an end this fall.

UMD Associate Director of Budget Monica West said that O'Malley responded to the proposal as best he could. "He wanted to freeze tuition, but the funds weren't available," she said.

A final decision on tuition will be made in the legislative session ending around mid-April, according to West. "Depending on magnitude of reductions, they'll decide what tuition rates are proposed," she said. "Then, we'll find out our final funding levels."

Blair predicted that the relatively small tuition increase would not affect the number of students who decide to attend UMD. "Having our in-state tuition frozen for the last five years has really made the university more affordable," he said. "I don't think it will have any serious impact on our enrollment."

Blair added that O'Malley spearheaded an initiative to reduce UMD tuition when he took office in 2007. Former Governor Bob Ehrlich had imposed steep yearly tuition increases of around nine percent, according to Blair. Ehrlich also implemented an additional five percent increase for the spring semester to close university budget gaps in 2003, the first time UMD had seen a tuition increase in the second semester.