The College World Series for baseball is equivalent to March Madness for basketball or the Bowl Championship Series for football. After baseball's regular season ended, the four best college baseball teams from 16 different regions played one game against the other teams in their region. The teams with the best record in their respective regions then advanced to a best of three series called the Super-Regionals. June 13 was the last day of the Super-Regionals as both Virginia and Texas A&M joined the eight team pool of all the Super-Regionals winners. Beginning June 18, those remaining eight teams will be competing in the College World Series, college baseball's highest stage. 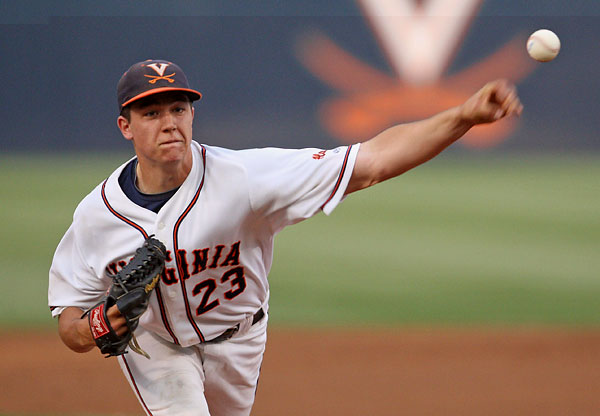 Photo: Danny Hultzen was the number two pick in the 2011 MLB Draft.

Photo: Danny Hultzen was the number two pick in the 2011 MLB Draft.

With all of this excitement and competition, there are many good reasons to tune into this year's competition. Whether it's the chance to watch Bethesda native Danny Hultzen play for Virginia or former Blazer Alex Egber for California, the College World Series is the series to watch. A few dedicated fans might watch to see Major League Baseball's recent draftees in their final college games, and for others it might just be another chance to see baseball being played as it is meant to be. But let's be realistic, you're not going to watch the College World Series, and neither is America.

So why is it that college football and college basketball bring in millions of fans and yet college baseball is generally left unnoticed? It is not the sport itself; according to an Entertainment and Sports Programming Network (ESPN) survey, professional baseball is America's second favorite sport, following football and preceeding basketball. The College World Series' low television ratings cannot solely be due to the fact that they are shown on cable, as ESPN's college football coverage brings in an average of three million viewers per game, double the viewership of the College World Series' championship game last year, which also aired on ESPN. Many people argue that the discrepancy is because football and basketball don't have minor leagues, while baseball has extensive minor leagues that take away importance from college play. However, the most talented players out of college hardly spend any time in the minor leagues anyway. Another reason could be the number of baseball players who skip college and go straight to professional baseball. But when Lebron James, Kobe Bryant, Dwight Howard and Jermaine O'Neal skipped college, March Madness didn't seem to lose any of its appeal.

So maybe there is no clear reason for college baseball's lack of popularity. It seems that football and basketball may forever be the premier college sports, regardless of baseball's popularity at the professional level and its high quality performances at the college level. Despite all this, I know that I will be watching the College World Series, rooting for Egber and Hultzen, California and Virginia and baseball as a whole, but I don't expect many other people to do the same.