An unplanned fire evacuation at the beginning of fourth period today was caused by either smoke or dust triggering one of the photocell sensors on the ceiling of the school, according to Blair business manager Jim Funk. A fire alarm was also pulled. The administration is unsure which triggered the alarm first, but will conduct no further investigation of the incident, Funk said. 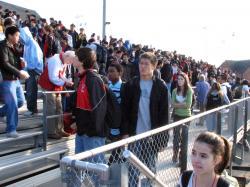 Photo: Students file onto the bleachers during the unexpected fire drill.

Photo: Students file onto the bleachers during the unexpected fire drill.

The evacuation occurred in the middle of an English High School Assessment (HSA) practice test that started in second period and ended by 5A. According to Assistant Principal Linda Wanner, the practice test was shorter than the alloted two-period time, which allowed the students enough time to finish. "I think we had a little bit of wiggle room," Wanner said. "It was of course an inconvenience."

English resource teacher Vickie Adamson was concerned with the effect the evacuation had on the benefit of the practice test. "The interruption was critical. It changed the atmosphere and attitude that students had," she said, noting that the students had been identified as being at risk for failing the assessment. "This is a population of students who matter for our [Annual Yearly Progress]," she said.

The evacuation ended roughly 10 to 15 minutes after it began. The fire department cleared the school for safety after the fire alarm was pulled, according to Funk.