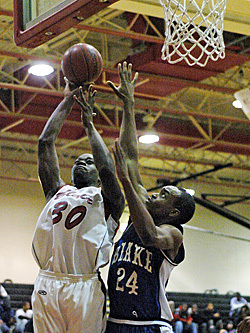 Photo: Samuel Francois (30) fights for position against the Bengals.

Photo: Samuel Francois (30) fights for position against the Bengals.


With seven regular season games left in the varsity boys' basketball schedule, the Blazers' playoff hopes rest on their success in the next few games. Blair's performance in Friday night's 64-51 loss to Blake revealed weakness in the team's execution and motivation. The Bengals jumped out to an early lead and never let up, dealing the Blazers their seventh loss in their last eight games.

The loss, just three days after 18th-ranked Springbrook embarrassed Blair in a 31-point rout, raises questions about the team's intensity, especially on defense. Coach Mark DeStefano explained that in "the last two weeks, disappointingly, we haven't done a good job playing defensively and with the sense of urgency we should have at this point in the season."

Blake (11-4), one of the county's most consistent basketball teams, demonstrated their experience in securing an early lead. Blair grabbed the opening tip, but Blake's pressure defense forced two erratic shots and a turnover in Blair's first three possessions, helping the Bengals to turn an early 4-0 lead. Junior Izzy Melton, who finished with a team-high 11 points, put Blair on the scoreboard with a strong move inside off a threaded pass from senior point guard Darius Smith, but Blake responded by sinking two consecutive three-pointers.

Senior Tori Patton got the Blazers back within reach early in the second quarter with two quick buckets, hitting a floater off the glass and a lay-up. Though Blair struggled with midrange shots all game, senior Ross Williams (10 points) finally hit a three with 3:24 left, capping off a run that cut Blake's lead to 23-20. Unfortunately for the Blazers, this was as close as DeStefano and his boys would come for the rest of the night. Blake, displaying their poise, called a timeout that stifled Blair's run. The Bengals proceeded to finish the half on an 11-6 run that put the Blazers in a 34-26 hole at the half.

Blair exhibited a quick flash of brilliance to start the second half, as Smith found senior forward Muhammad Roberson wide-open under the basket for a quick two. But the same inspired play was lacking on the defensive end, as Blake's motion offense led to wide open looks all over the floor. The Bengals found the back of the net, whereas Blair found everything but; Blake beat the Blazers 17-6 in the third quarter.

With Blake up 15 points at the beginning of the fourth quarter, the teams traded buckets, until with 4:30 left to play, the Blazers moved to a full court press. Blair's aggressive defense generated two steals that sparked a seven-point rally, bringing the score to 55-47 with 2:45 to go. But Blair reverted to sloppy play, leading to two easy lay-ups for Blake and dooming Blair's chances for a comeback.

Though DeStefano was unhappy with the team's recent performance (which he referred to as "very frustrating") he emphasized promise shown in both the potential of a few juniors' abilities and Blair's chances in the playoffs.

"I like watching the development of younger players Joe Dubuche, Mohamed Mansaray. It's very promising for the future," DeStefano said.