The Blair administration and security team reopened bathrooms on the second and third floors during 5A and 5B lunches last week, according to Principal Darryl Williams. Security team leader Cedric Boatman instructed custodians to stop closing the bathrooms after building service workers completed maintenance projects to restore damaged property and the administration identified students responsible for vandalism in the restrooms.

Photo:
Boatman implemented the lunchtime bathroom closures at the beginning of the second quarter to prevent students from skipping classes and hiding out in the upstairs bathrooms. The administration approved these temporary closures after Boatman received reports that these students had defaced bathroom property and made disruptive noises in the bathrooms and adjacent hallways. "When I get complaints from staff about kids running around on the second and third floor, we take action," Boatman said. "There has to be a classroom environment during lunchtime. Security has worked to help decrease the problem."

Boatman insisted that he did not close the upstairs bathrooms to resolve security shortages as security guard Adrian Kelly said in a Dec. 1 Silver Chips Online

Boatman added that the security team has never maintained a presence near the second or third floor bathrooms during lunchtime because his priority is to patrol the first-floor lunchroom and school grounds to prevent students from leaving campus. "During lunchtime, we're out and about...There are only 200 staff and only eight to nine on security," he said. "We have this whole school to cover."

Boatman was receptive to hiring more security guards at Blair, but he said that he will not change lunchtime security procedures, which currently call for one guard to monitor each floor above the lunchroom. "We can always use more help, not for the bathrooms, but to monitor the school better," he said. Williams recently submitted a request for a waiver on the Montgomery County Public Schools (MCPS) hiring freeze to replace a security guard who retired this fall and another who will retire at the end of this month. "As soon as I receive approval from central office, I will hire security assistants in those positions," Williams said. "I plan to backfill those positions for the remainder of this school year." 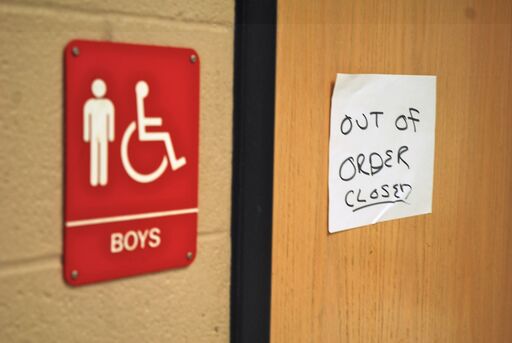 Photo: Second and third floor bathrooms were closed at lunch during most of second quarter. Photo courtesy of Wylie Conlon.

Poor conditions in many bathrooms at Blair also prompted the administration to lock bathrooms for repair work. Vandalized walls and broken fixtures were found in many upstairs bathrooms, according to Williams. "We had many toilets and sinks not working," he said. "Building services worked jointly with security to solve this issue." Under normal circumstances, the administration would have submitted a work order to the county's central office requesting employees for bathroom maintenance. Williams said that the deteriorating conditions and damaged property in Blair's bathrooms warranted more extensive measures. "It became a bigger issue," he said.

Since the upstairs restrooms reopened, security and building service workers have confirmed that students are still skipping class. Custodian Marianne Christopher reported finding between three and four students in the upstairs bathrooms last week during first, second, 5A and 5B periods. Despite these recurring problems, locking the upstairs bathrooms will no longer be considered as a possible solution, according to Boatman. "We're not going to close the bathrooms again," he said. "I guess we're gonna have to suffer." Parent Teacher Student Association (PTSA) co-president Peter Lafen suggested that parent volunteers patrol the hallways near the upstairs bathrooms to prevent students from missing classes.

Williams maintained that the temporary bathroom closures did not constitute a broad policy shift, citing past security decisions to close bathrooms when necessary. "We have closed restrooms a couple times since I've been here," he said. Boatman also denied student allegations that bathrooms were kept locked past lunchtime. "They were locked during the beginning of 5A and opened after 5B," he said, acknowledging that, "There were occasions when we might not have gotten there on time."