"V" is for vicious

The movie opens with a voice pleading the audience: "Remember, remember the fifth of November." Even before the credits begin to roll, any audience member will find it hard to ever forget.

"V for Vendetta" centers on the struggle of a single man, V (Hugo Weaving), against a despotic government in futuristic England. This England is totally isolated from the rest of the terrorist and plague-stricken world. Most freedoms have been compromised in exchange for security; there is only one TV channel, harsh curfews abound and any deviation from the religion, ideologies or laws of the government will end in torture or death. 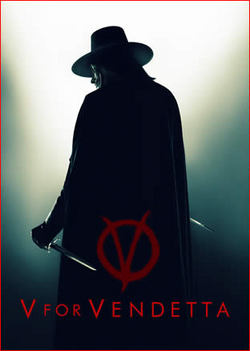 The most striking characteristic of this film is the genius with which V plans and carries out his attacks. V is disguised from head to foot as Guy Fawkes, a historical revolutionary who tried to blow up the parliament building in 1605. The crowning piece of this costume is a cheerfully smiling mask which obscures his face in public. In this getup, he strikes at the heart of the very system that ruined his previous life, executing brilliant plots that are at once civilized and brutal. V manages to peacefully utilize terrorist tactics to organize his revolution.

What puts this movie far above any average revenge flick are the elements of relevancy and acting-within-acting presented by both the dialogue and directing. The despotic government draws its power from the chaos of the outside world, namely the hopeless conflict and terrible disease that engulfs even the once-great America. Both of these issues have parallels in the modern world, what with the Iraq war and looming avian flu epidemic.

Acting-within-acting describes the kind of role that V plays, in that the audience never learns who the man behind the mask is, only catching glimpses of his past through flashbacks. Weaving plays a man with a haunted past, who in turn plays V, the devious and debonair revolutionary.

This unique characteristic is most evident in the scene where V meets Evey (Natalie Portman) by chance when she is caught by some government thugs in the street after curfew. When Evey asks who her rescuer is, V lets forth a deluge of "v" words, putting on a splendid show culminating in the detonation of a historic government building.
Most of the plot advancement stems from either the actions of the oppressive government or the findings uncovered by two special investigators trying to track down V, but the true entertaining substance is the genius with which V pulls the strings of the government and people to achieve his ends.

The writing, acting and directing blend together perfectly, casting a larger-than-life shadow over any scene in which V appears. The one incongruous aspect of the movie is V's seemingly superhuman speed. The few fight scenes in the movie were unrealistic and detracted from the masterful plot of the movie. Viewers who are interested in a more action-intense movie along the same revolutionary vein should check out films like Equilibrium.

"V for Vendetta" is rated R for strong violence and some language.