Students react to learning about alleged discrimination in MCPS

MCPS Board of Education member Valerie Ervin and Evie Frankl, Montgomery County Education Forum co-founder, discussed equality in education with Blazers after school today, Sept 8. The event, hosted by Students for Global Responsibility (SGR), addressed issues such as the lack of minority students in Blair's CAP and Magnet programs, tracking and the achievement gap. 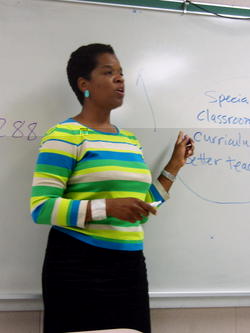 Photo: Board of Education member Valerie Ervin adresses an audience of Blair students after seventh period on Thursday. Ervin spoke about equity in education as part of a discussion sponsored by SGR.

Photo: Board of Education member Valerie Ervin adresses an audience of Blair students after seventh period on Thursday. Ervin spoke about equity in education as part of a discussion sponsored by SGR.

Between 2:10 and 4:00 p.m. approximately 50 students came to hear the speakers and share ideas. Student Member of the Board senior Sebastian Johnson and SGA President senior Barun Aryal were among the students in the audience.

According to Ervin, although Gifted and Talented (GT) testing takes place in the second grade, tracking starts as early as kindergarten and is responsible for the lack of diversity in many high level courses. Ervin believes that the problem with tracking is that minority students are identified as slower learners and are placed in lower-level classes at an early age, where they receive less attention and fewer resources. "There's something fundamentally wrong with [this] picture," said Ervin.

In her presentation, Ervin noted that the remedy for the current situation is for "all the good stuff about GT to be offered to every kid." In order to give all students equal opportunities, Ervin said that MCPS Superintendent Jerry D. Weast has agreed to reduce tracking by limiting the number of different math courses offered in fifth grade.

While Ervin mentioned that progress in closing the achievement gap is being made, she also pointed out that Montgomery County and America have a long way to go. "It breaks my heart to see SAT scores," Ervin said, while citing the fact that black and Latino SAT scores have declined steadily since 1990.

In her segment of the event, Frankl stressed the importance of students taking classes which challenge them.

After speaking, Ervin and Frankl opened up the room to questions. Many of the students had personal reactions to the achievement gap. "Now that I look at my past, I know that something was going on," said senior Mayra Zelaya.

Senior Jahnavi Bhaskar left the event pondering the causes of the achievement gap. "Maybe tracking isn't so much the problem," said Bhaskar. "Maybe the problem is that African-American single mothers have to work two jobs and can't come home to read to their kids."

In addition to the students, several teachers attended the event, including SGR sponsors George Vlasits and Kevin Moose, as well as social studies teachers Joann Malone and Lansing Freeman. Vlasits felt the event was a success because "it got students thinking."

Ervin speaks at such events to spread awareness and promote change within MCPS, she said. What she enjoys most about the events is learning about the student perspective so that she can better represent her constituents.