BLAZER FIELD, April 14 –
Trailing 5-1 with three innings to play, Blair's varsity baseball team mounted an inspiring comeback that was capped when junior outfielder Neil Corran made contact in the bottom of the seventh to bring in freshman Nevin Brown and send the Springbrook Blue Devils home with a loss, 6-5.

Coming off a dominating 8-0 performance against Magruder Friday night, the Blazers (7-4) struggled to get the bats rolling early against the Blue Devils. With just two hits in the first four innings, Blair dug themselves into a four-run hole. Because of walks and Springbrook errors, the Blazers were able to get on base, but lacked the hit to bring players in. Blair stranded nine runners in scoring position.

"For most of the game we were unable to come through with the hits when we needed them," head coach John MacDonald said. 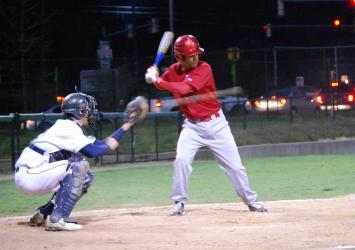 Photo: Senior Carlos Mesa watches the ball as he avoids hitting a bad pitch during Monday's game against Springbrook.

Photo: Senior Carlos Mesa watches the ball as he avoids hitting a bad pitch during Monday's game against Springbrook.

By the fifth inning though, luck changed for Blair. Junior third baseman Brady Ettinger singled over second base to load the bases for senior center fielder Carlos Mesa. Mesa ripped a grounder to the shortstop, forcing the out at second but bringing in freshman outfielder Peirce Marston. Brown then hit a deep sacrifice fly for one of his two RBIs, to cut the deficit to 5-3.

Senior pitcher Ruben Aguirre, who took over for junior Josh Gordon in the fourth, struck out two Blue Devils to keep Blair close. Aguirre finished with five strike outs and one earned run.

In the bottom of the sixth, Corran expertly bunted down the third base line, and thanks to an overthrow and a wild pitch, was able to make it to third base. Sophomore second baseman Alex Egber then hit the RBI single to left field, bringing Blair within one. Egber was not done however. With the bases loaded, Egber attentively stole home to tie the score at 5-5.

Aguirre ended Springbrook's chances to regain the lead single handedly, striking out two on blazing fastballs and tossing the final out to Gordon at first. Rolling on four unanswered runs, Blair aimed to seize the lead for the first time in the bottom of the seventh. The Blue Devils put in a new arm to start the inning, but after walking Brown, replaced the pitcher. Brown stole second and then, in a gutsy move, headed for third before the pitch reached the catcher. Brown narrowly slid in under the tag, putting the winning run just a hit away.

Then Corran, with one out, sent a sharp grounder to the third baseman, which was bobbled to allow Brown to come in for the win, 6-5.

"With [Brown] on third, I knew all I had to do was make contact," Corran said of his winning RBI.

Blair surrendered the early runs to Springbrook on a combination of defensive errors and timely Blue Devil hits. The Blazers committed two errors in the first inning, giving up an early 1-0 lead. Brown tied the game in the second on a sacrifice fly, but Springbrook jumped ahead with three runs in the third, thanks to two hits and a costly overthrow to first.

Blair continued to threaten, loading the bases in the bottom of the same inning, but were without a hit to make any of it count. Springbrook scored its fifth run in the fourth, while Blair once again stranded two runners in scoring position.

"Baseball's a funny game," MacDonald said after the game. "For us to play as poorly as we did in the first half of the game and make up for it with a win – well, we'll take the win."

The Blazers' next home game is Friday, April 18 against Sherwood at 7 p.m