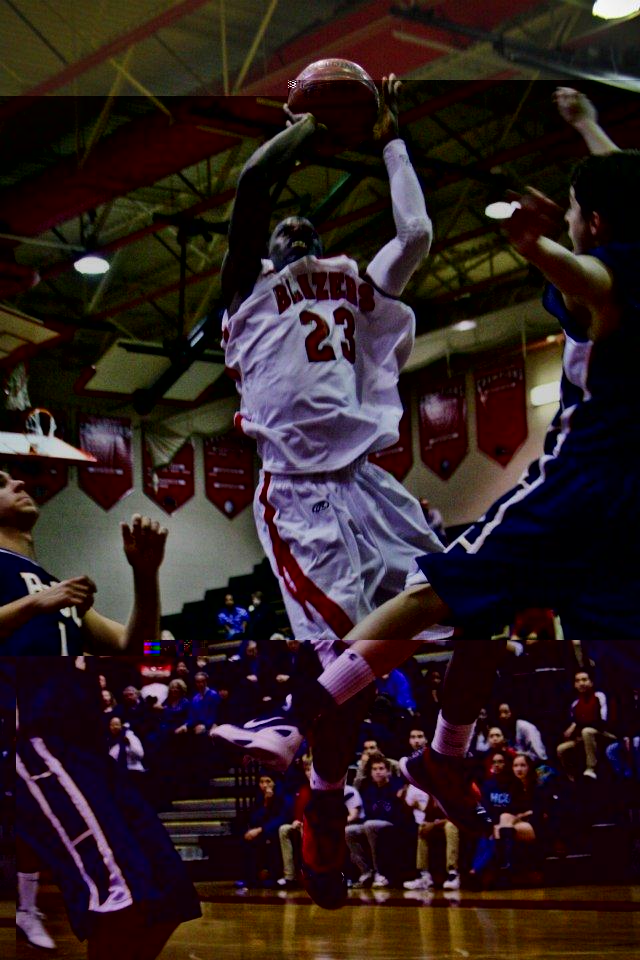 As the junior varsity basketball game came to a close on Wednesday night, the Blazers found themselves trailing by one point with less than ten seconds remaining. Blair inbounded the ball to freshman guard Danny Canary, who, blanketed by two defenders, drained a seemingly impossible three-pointer as time expired. For the second game in a row, JV won at the buzzer. Spectators thought to themselves, 'There's no way the varsity game can compete with what I just witnessed.'

Needless to say, it did.

There was a definite buzz in Nelson H. Kobren Gymnasium prior to varsity basketball's 74-71 overtime win over Bethesda Chevy-Chase. Blair head coach Damon Pigrom paced the sidelines in anticipation, eagerly awaiting the matchup against his former team – BCC – where he spent the past two seasons coaching.

According to senior forward Rick Narcisse, Pigrom's familiarity with BCC was a big factor in the win. "We read the scouting report really well, so we were able to shut down some of their key players," Narcisse said after the game.

Picking up where his younger brother left off, senior guard Tucker Canary scored the game's first bucket with a three-pointer a minute and a half in. Senior guard Theo Remy then hit a mid-range jumper on Blair's ensuing possession, and the Blazers were off to the races in their highest scoring quarter of the season. Blair forced turnovers thanks to a solid full-court press, and took advantage of BCC's sloppy play by getting easy buckets in transition. The Blazers led 23-12 at the end of one.

BCC began to figure out Blair's defense in the second quarter, finding senior guard Phil Brooks for three deep three-pointers. Offensively, however, the Blazers continued to hold their own. A spark off the bench came in the form of junior Justin Kung, whose aggressive style of play earned him big minutes throughout the entirety of the game. Blair retained its sizeable lead heading into the second half. 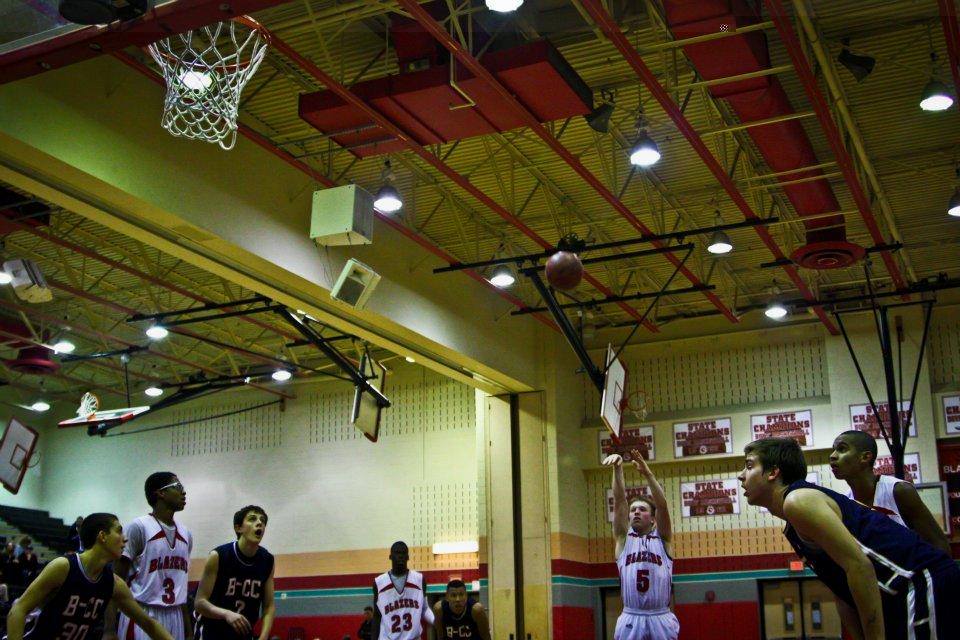 Things began to unravel defensively for Blair in the third quarter, with players failing to close out properly on the perimeter, allowing BCC to creep back in the game. "We probably stayed in the zone too long, so they were able to get into a rhythm from three," Pigrom said. However, Blair's head coach did credit his players for staying focused and eking it out in the end. "They were able to play through my mistakes and get it done."

The Barons had all of the momentum heading into the fourth quarter, having just outscored Blair 17-6 in the third. With 2:15 remaining in regulation, Baron guard Eric Tschiderer made a three to tie the game at 52. Seconds later, BCC forward Ghedalia Gold-Pastor laid it in to give his team its first lead of the game. However, the Blazers held their composure as Canary responded with two clutch free throws to dead-lock the game at 54 with a minute left. Each team held its ground during the final sixty seconds and headed back to their huddles to prepare for overtime.

After somewhat of a defensive battle to end the fourth quarter, both teams lit it up in the four-minute overtime period. Blair certainly wasted no time offensively, with Narcisse slapping the tip-off into the frontcourt, where Canary snagged the rock full-stride and drove it in for the easy deuce.

The remaining three minutes and 57 seconds of overtime would be a highlight reel of sorts for Blair's Theo Remy and BCC's Gold-Pastor, who scored eight and 12 points, respectively, during the extra period. Remy said he was extra focused heading into OT. "I was just thinking we need to get this W," he said.

Gold-Pastor, who finished with a season-high 32 points, made four three-pointers in overtime. Whenever Blair began to pull away, Gold-Pastor was there to respond with a cold-blooded deep ball. Fans of both teams were on their feet and yelling for the entirety of overtime in one of Blair's most exciting basketball games in recent years. 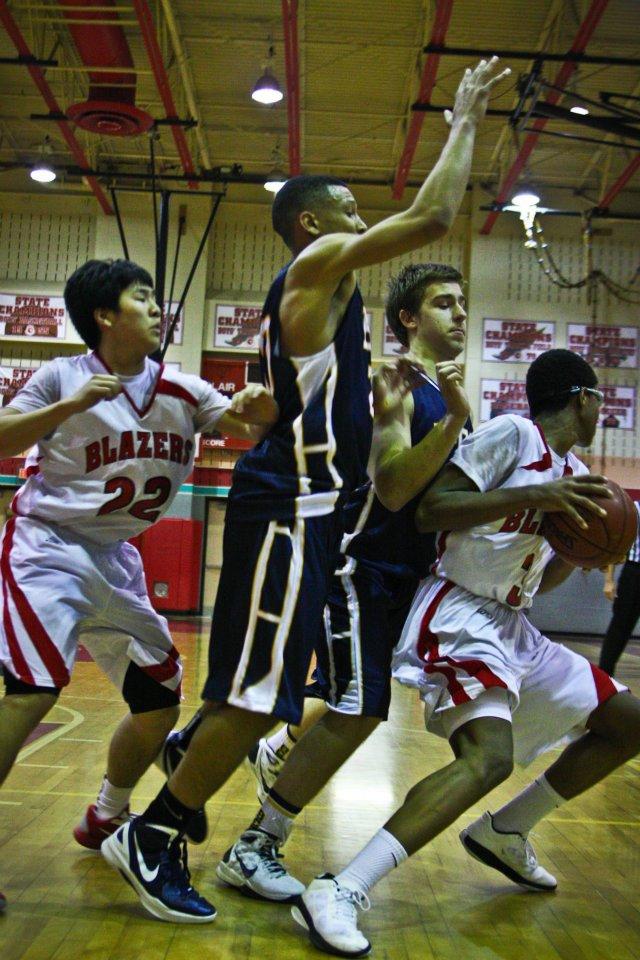 Although Blair failed to contain Gold-Pastor, Blair got the job done late in the game thanks to Remy's athletic drives to the basket and an old-fashioned three point-play from junior Julian Smith-Jones. Pigrom attributed his team's success in overtime to proper execution of what they had worked on in practice. "The last couple of days, we've been practicing guys getting out and running," he said.

With 2.7 seconds remaining, Canary hit a free throw to put the Blazers up by three points. Tschiderer missed a half-court heave at the buzzer to give Blair its third win of the season.

Canary and Smith-Jones led the way with 17 points apiece, while Remy and Narcisse chipped in with 16 and 11, respectively. "It felt great. Great accomplishment," Remy said. "I'm happy for myself, along with my teammates and coaches." While Gold-Paster exploded for 30 points in the second half and carried much of the scoring load for BCC, his teammate, Brooks, also had himself a game with 22 points.

In February, Pigrom came to Blair as head coach of BCC and beat the Blazers by a score of 63-44. He explained that he still has respect for his old squad. "It's a game," he said. "I have lots of respect for that team."

Pigrom also said that the team plans to work on rebounding to prepare for Monday's game at Quince Orchard. "We've been atrocious [at rebounding] our last couple of games," he said. "We're going to face teams that are bigger and more athletic than us, so it's important that focus on that."

The varsity basketball team will play its next home game on Dec. 21 against Paint Branch at 7:00 p.m.