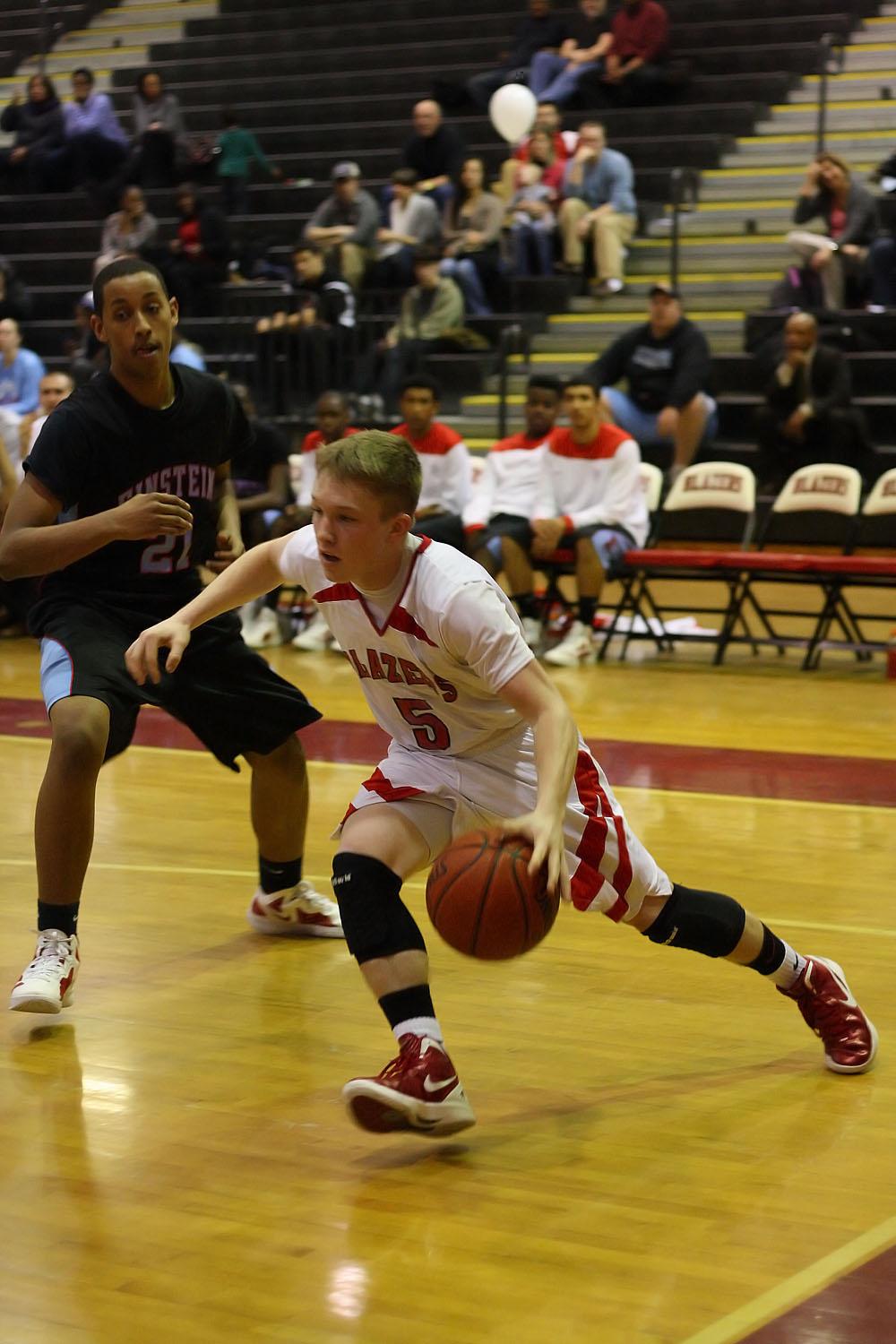 Einstein head coach Richard Porac is familiar with Nelson H. Kobren Gymnasium. After all, he coached JV basketball and taught Physical Education at Blair prior to accepting the Einstein job this past off-season. After meeting and greeting with former players during warm-ups, Porac rallied his troops and settled in for what would be a down-to-the-wire game between two teams trying to make the best of losing seasons.

On Tuesday night – senior night for five Blazers – Blair's varsity basketball team (7-15) fended off a late Einstein run to defeat the Titans (2-21) by a score of 54-50. Senior Rick Narcisse led all scorers with 22 points.

While Porac roamed the visitors' sideline searching for a third win, 30 or so Blair fans swarmed a corner of the home bleachers to make sure the return of their former teacher did not go unnoticed. The rowdy student section singled the Einstein coach out, chanting "Sit down, Porac" at every possible opportunity. A 2011 graduate even made a blow-up poster of Porac's face in an attempt to distract the first-year varsity coach.

Basketball-wise, the Blazers wouldn't fail to disappoint their loyal fanbase through the game's first half; Blair held the Titans to just eight and nine points in the first and second quarters, respectively. The Blazers led 26-17 at halftime thanks to strong play from Narcisse and sophomore power forward Ray Burtnick.

The third quarter has doomed the Blazers for a while now, as poor play over those eight minutes has cost Blair several winnable games this season. However, that reoccurring theme was non-existent on Tuesday night as Blair maintained control and upped its lead to 13 by the end of three. 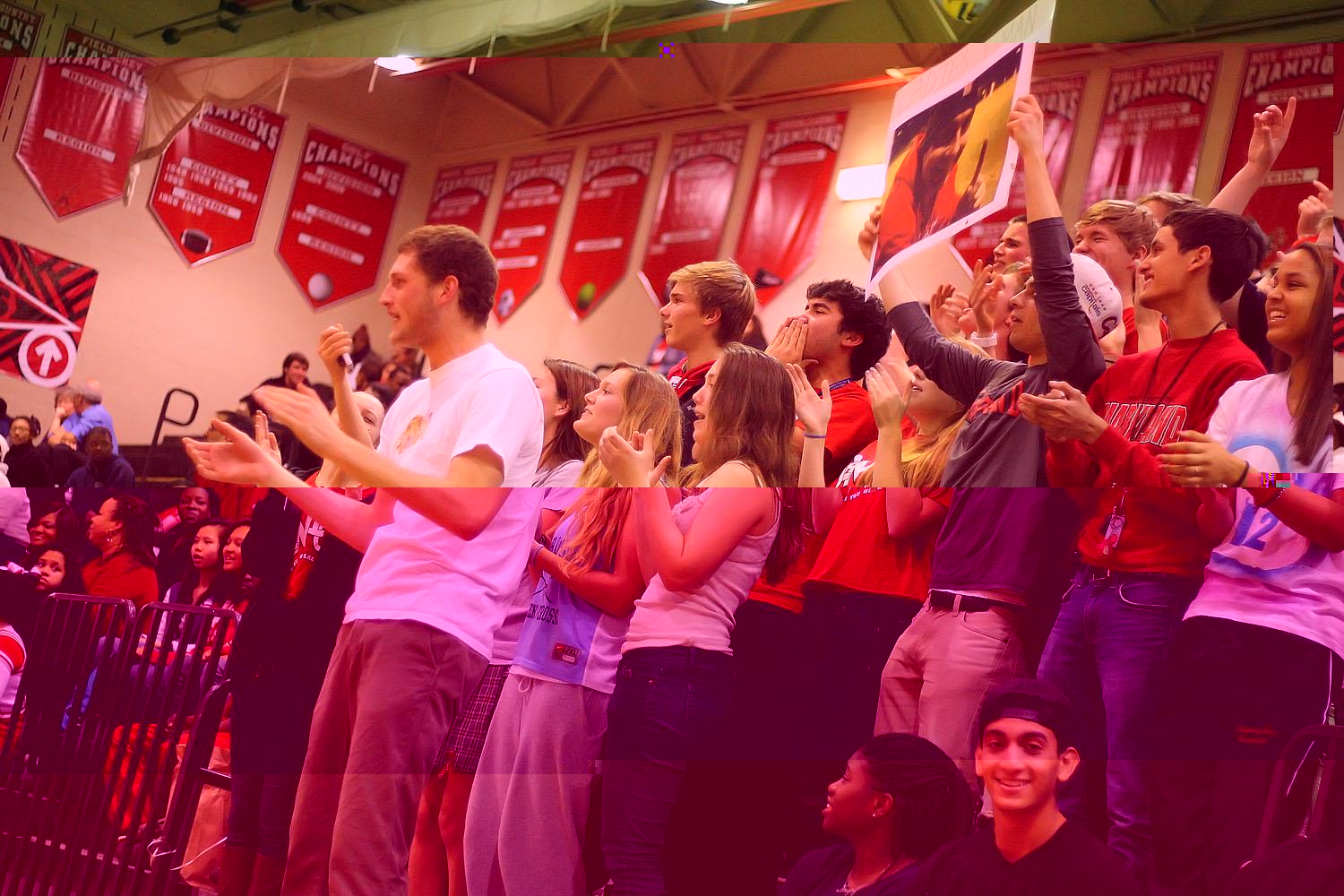 The Blazers lost focus in the fourth quarter, allowing Einstein to creep back in the game thanks to the play of Josh Ogburn (16 points) and Peter Belony (15 points). The Titans continued to cut away at Blair's lead, eventually tying the game with only a few minutes remaining in regulation.

Maybe it was the added support of a jam-packed student section, maybe it was superb coaching from Blair head coach Damon Pigrom, or maybe it was just the pent-up frustration that results from a 15-loss season, including a stretch of ten Ls in a row. Whatever it was, the Blazers found the energy in the final minutes to put away the Titans and end senior night on a positive note. Strong passing, solid ball handling and a few key free throws down the stretch resulted in Blair's 54-50 victory. "Through practice, we've worked on sticking together as a unit," senior guard Tucker Canary said. "In the last huddle, we said, 'We're gonna do it as a team, win or lose as a team.' I think that's what got us through it."

The Blazers caught a break in the post-season seeding process, nabbing the five spot and a matchup with Richard Montgomery on Friday night. Canary said the team is watching film individually to prepare for Friday night's playoff game, and he's confident about Blair's chances against the 9-13 Rockets. "At this point, we've just got to play our game. It's key to stick to our game," Canary said. "There's not much we can work on at this point."

Fellow backcourt mate Justin Shack pinpointed rebounding as another key to success against RM. "We haven't rebounded well this season, so rebounding is gonna be key," he said. "If we rebound, we'll win."

The varsity basketball team will play its first playoff game at home against the Richard Montgomery Rockets on Friday, Feb. 24 at 7:00 p.m.