The varsity field hockey team (2-0-0) won their second game of the season in a 9-0 blitzkrieg, crushing the Einstein Titans. Blair faced a more challenging opponent this game, and frequently engaged in battles for possession across the field. "It felt a lot more intense than our previous game," junior forward Miranda Bernard said. Despite this increased intensity, the Lady Blazers managed to blow the Titans out of the water. 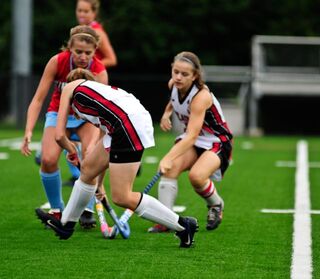 Photo: Senior Nellie Garlow fends off an attack from Einstein.

Photo: Senior Nellie Garlow fends off an attack from Einstein.

Blair started strong with a goal from senior forward Samantha Lint following a corner penalty shot taken by senior captain Nellie Garlow. The Blazers kept the Titans away from their goal and spent most of the game making quick passes up the sideline and into Einstein territory. Garlow acknowledged the Blazers' skillful transitions. "One of our biggest strengths was passing," she said. By halftime, the Blazers were up 4-0.

At this point, head coach Brooke Franceschini told her team that their main goal for the second half was to increase their score. "I want at least three more goals," she said.

The team delivered, scoring three goals in the first ten minutes of the second half. Blair made a total of 16 shots on goal and had nine penalty corners throughout the game. When the match was over, the Blazers had racked up a score of 9-0, but Franceschini would have liked to see more goals scored on corner penalties. "We're fast, we're good and we should be making these shots," she told her team at halftime.

Franceschini noted Garlow and Bernard as significant members of the Blazer offense during the game. Bernard scored three goals and Garlow, who took all the corner penalties, was responsible for one goal and four assists. Franceschini also praised midfielder Lily Alexander for her dodging skills and defender Laura Li. Alexander used quick taps with the stick to evade the Titans and send the ball down the sideline.

Despite the skillful contribution of certain players, Franceschini said that there is still much work to be done to improve the team's communication, ball control and organization on the field. Franceschini noted the high number of fouls called against the Blazers for using their feet to interfere with the direction of the ball, a concept known as advancing. "We're playing well, but we need to play better together," she said. "We have to play smarter."

Regardless, Garlow said the team showed a lot of potential. "I'm really excited for the rest of the season," she said. "We're improving more with each game."

Titan coach Suzanne Murray explained that Einstein benefited from the stiff competition Blair provided because their team has many new players this year, including a new goalie. "This was definitely a learning game," Murray said.

Playing on the turf field was also a learning experience for the Titans. Murray noted that the smoother surface made it easier for Einstein to get up and down the field, and easier for Murray to see how each player handled the ball. "It's quicker, faster and your skills are really shown," she said.

Field Hockey will play their next home game Monday, Sept. 21 against Sherwood at 5:00 p.m.