Warriors score four touchdowns in first half, Blazers fall to .500

Blair's varsity football team found themselves outclassed by an undefeated Sherwood squad Friday night, scoring their only touchdown in the final minutes of a 35-7 loss. The Blazers were unable to match the dominating offensive firepower of the Warriors (6-0), who put up two touchdowns in each of the first two quarters for 28-0 halftime lead. Blair was without head coach Jeffery Seals, who missed his second straight game due to illness but is expected to return for next week's match at Wootton, according to assistant coach Bryan Nance.

Going into the game, Blair (3-3) understood that Sherwood was one of the county's best teams, but decided to approach the game as any other. "We knew they were tough," Nance said after the game. "But we were going to come out and run the ball like we have been all season. Before the game we were banged up, but we went out with what we had and played hard." 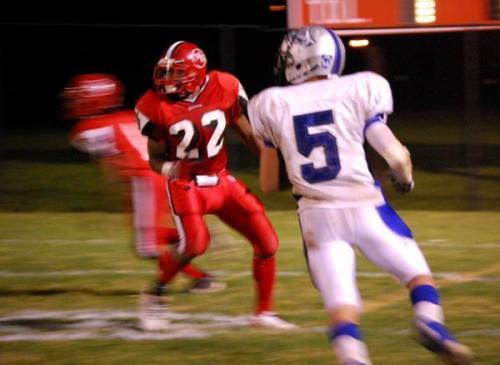 Photo: Senior running back Jonathan "Jamrock" Haughton looks for a pass while avoiding a Sherwood opponent. Blair lost 35-7 against the undefeated Warriors.

Photo: Senior running back Jonathan "Jamrock" Haughton looks for a pass while avoiding a Sherwood opponent. Blair lost 35-7 against the undefeated Warriors.

In addition to pre-game injuries, Blair was plagued by new ones all game long. Senior fullback, quarterback and linebacker Dayne Bolt was pulled from the game early in the first quarter with an ankle injury. "Dayne was taking a banging on his ankle," Nance said. "I didn't want to risk him getting hurt further so I pulled him out – we are going to need him for a late push in the season into the playoffs." Senior quarterback Victor Wang was also sidelined during the second half with a shoulder injury.

The very start of the game seemed to favor the Blazers. After the Warriors received the opening kickoff, senior running back and linebacker Jonathan "Jamrock" Haughton forced a fumble on Sherwood's first offensive play. Blair recovered the fumble with great field position at the Sherwood 23-yard line but was unable to gain any yards on the ground. A field goal attempt by junior kicker, running back and cornerback Andrew Gondor was blocked, resulting in a scoreless possession.

The Sherwood offense took over from that point on and proved too dominant for the Blazer defense. The Warriors marched down the field and scored on play-action passes in the red zone twice in the first quarter, building a quick 14-0 advantage. Meanwhile, the Blazers were getting stuffed in the running game – their staple mode of offense – and the Warriors picked off Wang to keep Blair from relying too heavily upon throwing the ball.

The Blazer defense was able to step up in the second quarter and force punts from the Warriors. But the Warriors' defense remained too strong for the Blazers to put together successful drives. The Warriors tacked on another touchdown off a two-yard run midway through the quarter and fourth on a 15-yard slant route pass with 20 seconds left in the half, leaving the Blazers behind 28-0 at halftime.

A scary moment came midway through the second quarter when a Sherwood player went down after being hit in the chest by a player's helmet. The injured player was taken off the field motionless in an ambulance. Players and officials reported that the player suffered a broken rib cage.

The start of the second half displayed what appeared to be a brand new Blair team, who marched down the field with good runs by senior running back and linebacker Pablo Moreno. But Sherwood stopped Blair's momentum cold by forcing a fumble to regain possession and put together a drive that took up most of the quarter. Blair was unable to recover, and another Sherwood score on a play-action pass from inside the red zone provided the Warriors with 35-0 lead heading into the fourth quarter. Blair threatened a few times, making it to the red-zone three times in the second half, but was unable to score until the final minutes of the game. Senior running back Keith Ayensu capped off the Blazers' final drive, founded on hard runs from Moreno, with a five-yard touchdown run on fourth and goal, raising the final score to 35-7.

The Blazers travels to Wootton next Thursday to play in what will be an important game for Blair's playoff hopes. The Patriots are also 3-3, but had a strong 35-7 outing against Whitman, who Blair beat narrowly, 13-7.

Said Bolt about the rest of the season: "We've just got to fight. If we can be healthy, we can make this a season to remember. We're not out of the playoffs yet – but we've got to fight."

The varsity football team plays its next home game on Oct. 31 against Damascus at 6:30 p.m.