In a nail-biting game, the Blazers (4-2-0) tied the Sherwood Warriors (4-1) 2-2 in Blair's final divisional match. Blair took an early lead at the first half, coming out strong and controlling the midfield. While both teams possessed the ball fairly equally, the Blazers excelled in putting pressure on the Warriors defense and had ten shots on goal by the end of the game. In the second half, however, Sherwood's midfielders regrouped and dominated in distributing the ball across the field, allowing them to come back and get the tie. 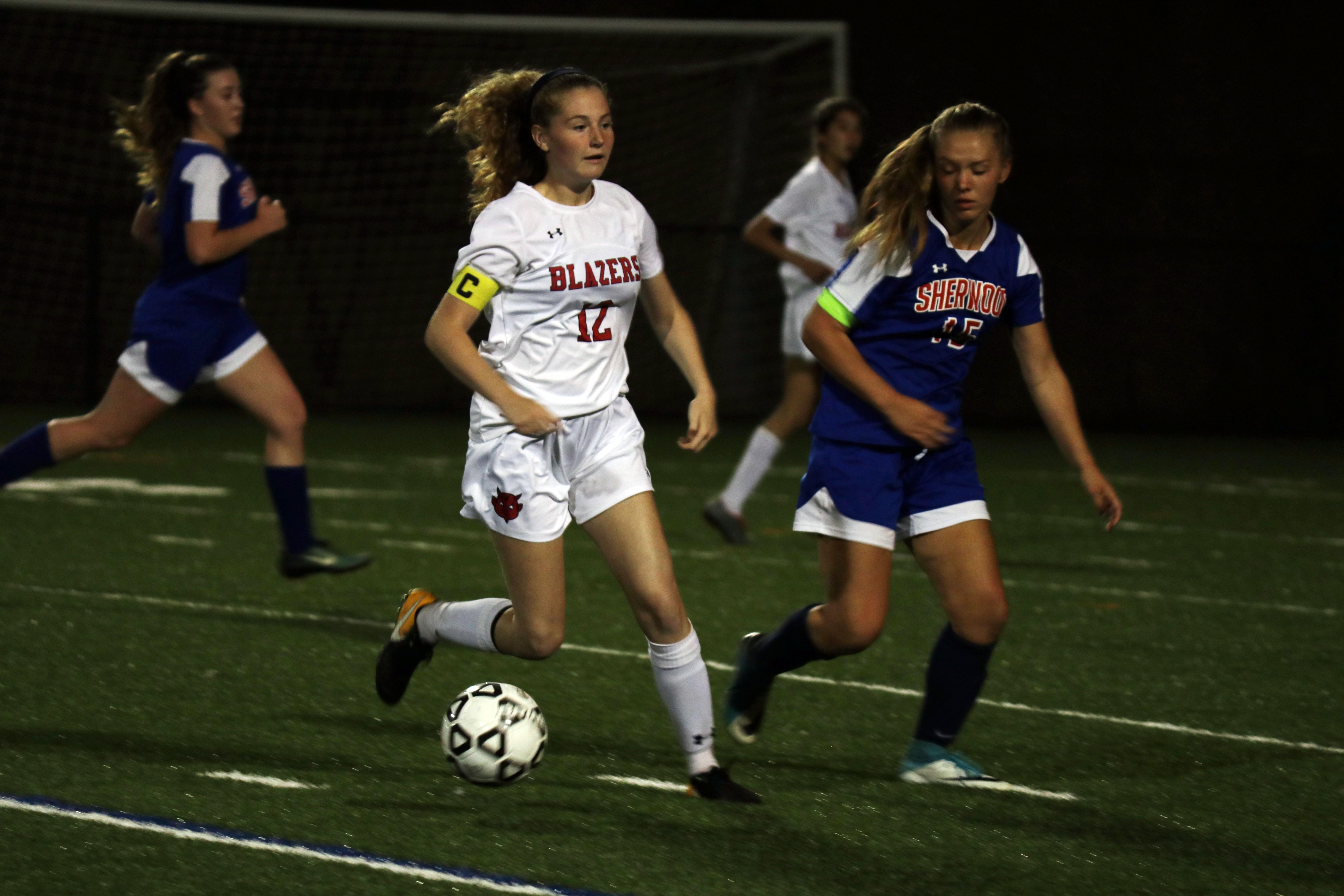 The Blazers kicked off the game with a quick goal in the first six minutes. Blair forward, sophomore Dede Greenfield, scored an incredible volley from outside the 18 yard box. Assisted by junior captain Maddy Merrill, the ball was crossed into the center of the field where Greenfield fired it into the top right hand corner of the net on a perfect one touch volley.

The Warriors fought back hard, maintaining possession and driving the ball down Blair's defensive flanks. In the 24th minute, the Blazers conceded an unlucky goal due to a miscommunication between the keeper, sophomore Zoe Abram and her center-back. A Sherwood striker was able to outmaneuver two of Blair's defenders, but took a poor first touch when she approached the edge of the 18 yard box. The Blazers center-back was able to briefly gain possession, but thought that Abram was coming to pick up the ball. With her back turned, the Sherwood forward was able to outpace the Blair defender and tap the ball pass Abram which tied up the game 1-1.

The Blazers launched a fast counterattack and the right-back, junior Emma Markus, took a powerful shot from the 35 yard line which just barely skimmed over the top of the crossbar. With both teams battling hard for dominance over possession in the midfield, it wasn't until 32nd minute that Blair was able to get another ball in the back of the net. Starting center-mid Rachel Day sent a well-paced pass into an exposed gap of the Warriors defense. Merrill picked up the run, weaving through the Sherwood defenders and receive the ball while staying onside. On a 1 on 1 against the keeper, Merrill calmly placed the ball into the bottom right corner of the goal. At the end of the first half, the Blazers were leading 2-1.

Sherwood came out determined in the second period, challenging the Blazers midfield and putting intense pressure on the defense. "Sherwood was relentless in the second half; they had a lot of offensive drives and wore out our defense," said junior Rachel Shereikis. Throughout the half, both teams battled for possession and had multiple shots on frame. But, in the final 12 minutes of the game, the Warriors were able to tie the match. One of the Sherwood mid-fielders slid a through ball pass Blair's defense and their striker chipped the ball right over sophomore Bernadette Hargrove, the Blazers other keeper. In overtime, the game proved to be a stalemate with neither team able to gain any ground or momentum, resulting in the 2-2 tie.

When reflecting on the match, Merrill expressed her disappointment. "I was a little let down from the result. I came into the game expecting to win." Merrill said. Coach Robert Gibb reinforced Merrill's opinion of the match and believed that the Blazers failed to deliver when they had chances. "It was an unlucky loss, we made mistakes and our opponent took advantage of them. We couldn't capitalize on our opportunities."

The Blazers will face Quince Orchard next Tuesday, October 10th, at 7:15 PM.