In a fierce, back-and-forth battle, the night's only goal belonged to senior forward Jenny Williams of Blair's varsity girls' soccer team, handing them a 1-0 victory over Whitman for the first time ever on Tuesday. The Blazers were able to control the pace of the game and keep Whitman from getting to the goal, improving their record to 4-0.

Head coach Robert Gibb was very pleased with the way his team performed. "It was a great game," Gibb said. "The run of the play was ours. We controlled the pace of the game." 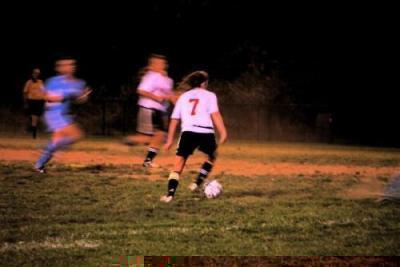 The game's lone goal came with 24 minutes left to play, when senior captain and midfielder Anna Rassman sent a ball up the right wing to junior Kelly Pelz-Butler. Pelz-Butler beat her defender to the end-line, then faked a shot and cut it back in order to send a cross towards waiting senior forward Williams. Williams, a goalie last year but now a converted striker, one-timed the ball past the Whitman keeper for the score and the win.

Rassman was ecstatic after the emotionally draining battle. "Their players all play on travel teams and they're big into fitness," Rassman said. "We don't have that, but we have heart."

The victory marks a second straight win avenging a loss from last season, coming after a championship win against Walter Johnson in their annual Big Train Soccer Fest last weekend. Last year, Whitman narrowly buried Blair by a familiar 1-0 margin. This season, with the talent and experience necessary for a deep playoff run, Blair threatens to avenge the rest of last year's defeats.

Amidst a victorious night, Blair faces a potential setback in an injury to freshman starter Jamie Kator. Kator was carried off the field by Gibb after a collision with a Whitman player. Gibb said that she hurt her calf. The severity of the injury was unknown.

The first half was scoreless, as neither side gained full control of the ball. Senior captain Molly Brune anchored the defense as the Blazers continually denied Whitman, keeping them out of scoring range. "I don't think Whitman was able to make any close shots on goal," Gibb said.

Blair began to control the ball better in the second half, displaying the cohesiveness and chemistry that has been characteristic of the team thus far this season. The Blazers created a few dangerous chances capped with clear shots on goal, but Whitman's goalie was able to keep most of the shots out of the net.

Whitman escalated their offensive pressure after falling behind, but Blair's backline held tough. With less than two minutes left, Whitman was awarded a threatening freekick. The serve, however, was unable to get past the Blazer defense. "Our defensive players were solid and they really wanted to win," Gibb remarked.

Gibb was disappointed with the field conditions during the game. "The ground was bumpy and bouncy," Gibb said. "It was hard to play our style." Even so, Gibb felt that the team did a good job playing the field, spreading out and using the field's entire width.

Looking past the sentimental win, Gibb is looking at this game as a precedent for the rest of a successful season. "I told them on the first day, this is a special team," Gibb said.