As freshman Camilla Arias came home to score the eighth run at the end of the first inning Monday night the Blair fans were already asking what the mercy rule is. In high school softball, a team needs a 10-run lead in five innings for the mercy rule to be enforced, and the Blazers' focused defense and aggressive offense achieved that by the end of the fourth inning. The mercy rule was called at the top of the fifth and the game ended 17-0 for a decisive Blair (3-0) win against Einstein.

Photo: Senior Becca Arbacher bunts the ball in an effort to advance the runners on base.

Photo: Senior Becca Arbacher bunts the ball in an effort to advance the runners on base.  Photo courtesy of Tolu Omokehinde.

Einstein's slow pitch technique, coupled with a large number of errors throughout the game, proved to be no match for Blair's consistent play. "They were slow pitching, which tends to be really easy to hit and it gives you more time to think and be able to crush the ball,” junior Kara Madden said.

From the first inning, line drives from sophomore Annie Pietanza and senior captain Becca Arbacher and solid hits from junior Melissa Romero and Cruz overwhelmed the Titan infield. Blair benefited from frequent steals and doubles, as clean hits tore into left field. "Softball is a game where you depend on your pitcher, they had trouble with that and it's hard to come back from. They also had a lot of fielding errors," said Arbacher. Romero agreed, "They just really weren't that focused." 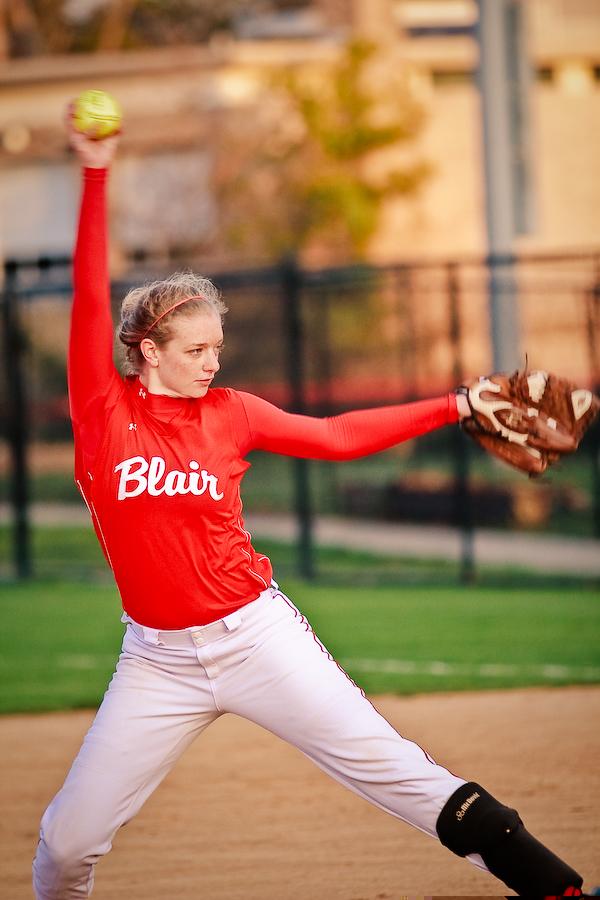 Blair, however, shut out Einstein by maintaining tight fielding throughout the game. Arias, senior captain Samantha Schweickhardt and freshman Maria Cruz maintained an impenetrable defense in the second inning. Their coordination and focus led to several smooth plays that brought the top of the second to a quick finish. After a strikeout by Schweickhardt, a bunt fielded by Cruz was flipped to Arias who stretched from the first base bag and barely snagged the ball for the second out. Head coach Louis Hoelman thought the team played a strong defensive game. "We made every play in the field, our heads were really in the game," he said.

In a clean defensive play by Einstein, Arbacher was tagged out en route to first, though an error in the following play - a bobble by the catcher - allowed freshman Megan Houlihan to slide in to home for the 11th run during the second inning. "We put a lot of pressure on the other team's defense by being a well-rounded offensive team and being able to slap, drag, and swing away," said Hoelman.

Strong offensive plays followed in the third and fourth inning, including a double by Cruz and a triple by Schweickhardt. The game ended in the middle of the fifth inning after two strikeouts and a smooth play by sophomore Brianna Villa, who fielded a grounder at first and tagged out the runner.

The 17-0 shutout continued Blair's winning record and pleased the team as well as the coaching staff. "The best part was realizing that we were playing our game, not theirs," said Arbacher.

The girls' varsity softball team will play their next home game on Monday, April 2, against Quince Orchard at 10:00 a.m.