Blair football finally gets its win against the Einstein Titans 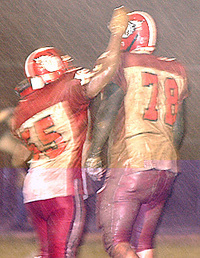 Photo: Blair players celebrate in the rain after a hard-earned victory.

Photo: Blair players celebrate in the rain after a hard-earned victory.

Winning always feel good — even when it's cold, wet and muddy — but especially when you've lost seven games in a row. Tonight, the Blazers finally put one in the 'W' column, edging out a victory over the Einstein Titans, 8-6. Saving a winless season, they improved their record to 1-7.

So late into the season, a playoff berth or even a winning record are both impossible. Rather than be discouraged, however, the Blazers showed up tonight, despite the horrid conditions, as they have every week, looking for a victory.

Coach Seals, who remained calm throughout Blair's seven-straight losses, struggled to maintain his composure when the fourth quarter expired. Choking back tears, he simply muttered, "Damn it feels good to get a win."

Blair dominated the first quarter. Squelching Einstein's opening drive, they held the ball for the entire quarter, finishing with a touchdown with 1:05 left on the clock. On second and goal, Williams was pitched the ball, dodging any opposition and easily striding in for the touchdown. Momentum rolling, the Blazers opted to go for a two-point conversion. They again pitched the ball to Williams and again found the end zone. Ahead for the first time since week one, 8-0, the crowd went wild. 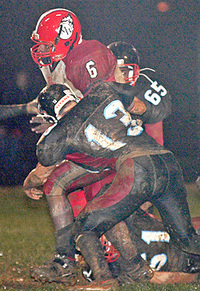 Einstein quickly retaliated at the beginning of the second quarter. Quarterback Jerome Walter, in three plays, led his team to a touchdown. The Titans tried to tie the game with a two-point conversion, but were unsuccessful due to senior Scott Lavon's sack. Einstein's touchdown drew them near, but not near enough, leaving the score, 8-6, Blair.

The two teams continued to fight back and forth, neither yielding very much ground until the final minutes of the fourth quarter. With three minutes left in the game, the Blazers found themselves on fourth down with two yards to go on the Einstein 40-yard line. A field goal was impossible and a punt would likely benefit the Blazers little, so they decided to try for the first down. Senior Rodger Brown was unable to convert, giving the Titans the ball with 60 yards to conquer and just fewer than three minutes on the clock.

Reminiscent of the first game, in which Richard Montgomery came back to steal victory from the Blazers after a promising start, the tension was palpable. Walter could suddenly do no wrong, leading his team to first down after first down. Einstein reached the Blazer 15-yard line with :30 left in the game. On second down, with the clock running, Walter hurried his team to the line, hoping to spike the ball and stop the clock.

Maybe it was the rain, maybe it was pity or maybe it was just sheer dumb luck, but regardless, Walter, set up in the shotgun, dropped the ball. Blair recovered and the sidelines erupted. At last, a Blazer victory.