Scoring was stagnant in the first quarter as both teams tried to get settled into their offensive rhythms. Although the Blazers were outmaneuvered several times on defense, the Colonels did not score until two minutes into the game. Blair's first points of the game came a minute later when senior Kalisha Holmes capitalized on sloppy Magruder defense to tie the score at 2-2.

Photo: Junior Ashley Arnold goes up for a layup in Blair's win over Magruder on Friday night.

Photo: Junior Ashley Arnold goes up for a layup in Blair's win over Magruder on Friday night.  Photo courtesy of Molly Brune.

Freshman Janet Henkai followed Holmes with back-to-back baskets, but several turnovers on both sides allowed the Colonels to begin pulling away with the lead. Junior Jenny Williams closed the gap to 10-18 with a three-pointer and a foul shot to end the first quarter.

After the break, Magruder's increasingly sloppy defense and ball control allowed the Blazers to make an eight-point run led by senior Sarah Ramsay, who started the scoring with a bucket and a foul shot for a three-point play. Holmes and Williams also contributed with a field goal and a three-pointer, respectively.

Williams continued to score consistently and even put the Blazers ahead briefly 24-21. But before the end of the half, increased Colonel concentration and a free throw by senior Meghan Cadigan tied up the score at 25.

In the third quarter, the Blazers upped the offensive intensity that they had shown flashes of in the second. Holmes drew several fouls and Cadigan and junior Ashley Arnold led the team's aggressive defense, getting steals, forcing turnovers and blocking shots. But this impressive run was not without a price. While going up for a shot, Henkai suffered a possible concussion and was later escorted to the hospital.

The loss of Henkai did not stop the rest of the Blazers from dominating the quarter. In addition to playing fierce defense, junior Ashley Arnold led the team in the quarter with six points. Holmes and Williams both scored five points; three of Williams' coming from a fade-away three pointer. By the end of the third quarter, the Blazers were up nine, 43-34. 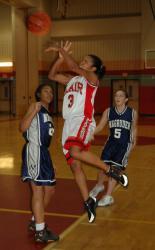 Photo: Senior Kalisha Holmes powerfully drives towards the basket during a 52-47 win against Magruder.

Photo: Senior Kalisha Holmes powerfully drives towards the basket during a 52-47 win against Magruder. Photo courtesy of Molly Brune.

In a nail-biting fourth quarter, the Colonels refused to accept defeat and immediately started chipping away at Blair's lead. The Colonels narrowed the lead to six in about two minutes. Then, the Colonels and Blazers missed several shots before Arnold replenished the Blazer lead with four points.

With 1:30 left on the clock, Blair was ahead by a slim 48-46 lead. The Blazers managed to widen the advantage with Holmes, Williams and Ramsay drawing and scoring on fouls. Clutch shooting at the foul line gave the Blazers the final lead, 52-47.

Reactions to the win were mixed from both players and coach. "I'm proud of our team, and happy we got out of a slump," Holmes said. "It was tough but we handled it well, we need to control the ball more at the end."

"We played well tonight," head coach Erin Conley said. "Especially offensively but not so much defensively, like getting rebounds and boxing out."

The Blazers' next home game is Jan. 23 at 5:15 p.m. against the Richard Montgomery Rockets.