Viewers will wish that "47 Meters Down" hadn't been "Uncaged"

The sequel has all the elements of a stereotypical shark thriller

Complete with clichéd dialogue, poorly-developed characters and a predictable plot, "47 Meters Down: Uncaged" is exactly what one would expect from a shark movie.

The film follows the daughter and stepdaughter of Grant (John Corbett), a diver who recently discovered an underwater Mayan city in Yucatán, Mexico. His daughter Mia (Sophie Nélisse) and stepdaughter Sasha (Corinne Foxx) drive to a secluded lagoon with Sasha's friends Alexa (Brianne Tju) and Nicole (Sistine Stallone). Nicole convinces them to go scuba diving in one of the caves of the city that Grant is excavating, whose entrance conveniently happens to be located in the lagoon.

The girls quickly realize that they are not alone in the cave, and must make their way through the maze-like city. As they journey through the labyrinth, the oxygen supply dwindles, the shark's kill streak goes up and the girls get increasingly panicked.

The characters in the movie are ironically very shallow. The majority only care about themselves, focusing on nothing but their own chances of survival. But none could possibly be more focused on self-preservation than Nicole who destroys an escape route in an attempt to save her own skin. As a matter of fact, her entire personality seems to revolve around making idiotic decisions that endanger the rest of the group.

There isn't much to be said of the rest of the characters, either. Although the other three teens seem to possess more common sense than their friend, the viewer doesn't get to know much about them before they are thrust into the deep.

The plot was incredibly similar to that of the original "47 Meters Down." There are a few predictable jump scares. The dialogue consists mostly of gasps, heavy breathing, and high-pitched screams. Not to mention that the "sharks" look like they're made out of rubber (which they probably are).

The filmmakers attempt to make up for their uninteresting plot by casting Foxx and Stallone, daughters of successful Hollywood actors Jamie Foxx and Sylvester Stallone. But while their acting wasn't awful, it certainly wasn't award-winning. 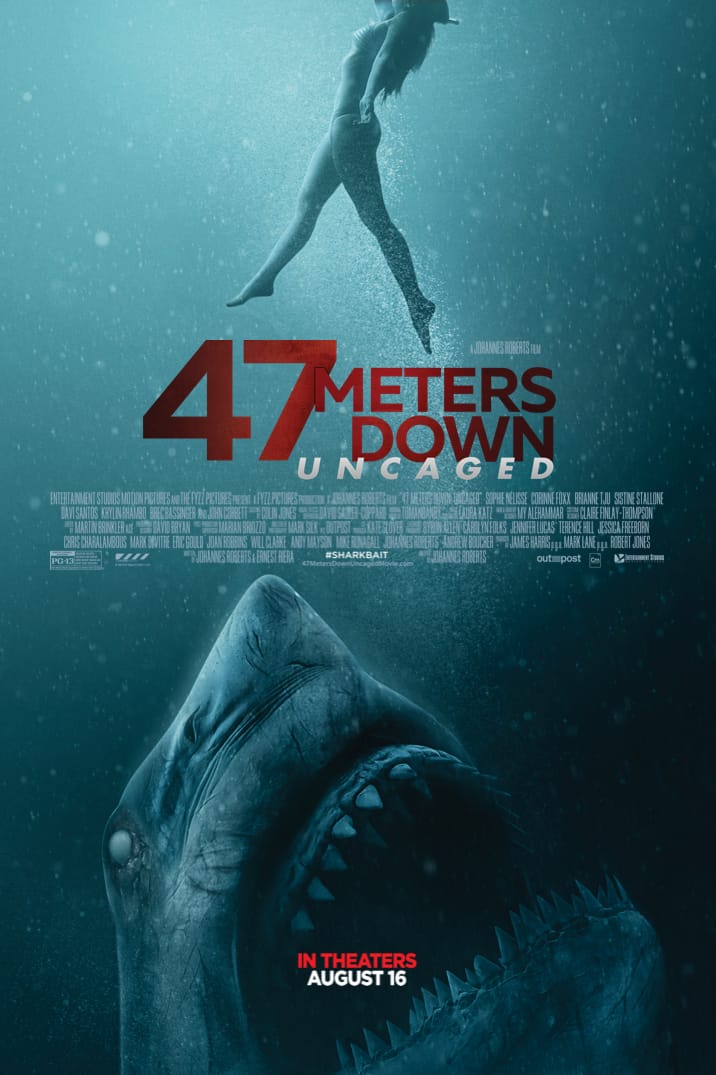 Photo: "47 Meters Down: Uncaged" is no different than any other shark thriller.

Photo: "47 Meters Down: Uncaged" is no different than any other shark thriller.

Unfortunately for director Johannes Robert, "47 Meters Down: Uncaged" doesn't quite live up to the reputation of the original. Admittedly, it is difficult to produce any shark horror movie that doesn't come across as predictable or cliché because the writers must find a balance between eliminating too many or too few characters. If too many die the movie comes across as downright gory, but if too few die it's not frightening enough. Since there's such a fine line between too many and not enough, only so many plot points can be written in that haven't been used before.

For anyone considering watching it who has already seen a shark movie, don't bother. Your oxygen, like Nicole's, could be put to better use.

"47 Meters Down: Uncaged" is rated PG-13 for violence and gore and is now playing at Regal Majestic & IMAX and Regal Hyattsville Royale.