With an infusion of strong freshmen into its already-strong boys line-up and stepped-up performances from many of its girls, the Blazers began the season with high hopes of victory -- hopes that were immediately tempered by two consecutive losses.

After the boys scored their first victory against Sherwood on Jan. 15, however, Blair's losses seemed to be finally coming to an end. The Blazers hoped to seal a new winning streak with a second victory over the Whitman Vikings, but the pool gods had other plans. Instead, the Blazer boys fell 74-97, and the girls suffered a 43-126 defeat, dropping their seasonal records to 1-3 and 0-4 and dooming the boys' hopes of a .500 season.

After out-swimming Whitman's relay teams at the County Relay Carnival, the Blazer boys came into the meet with the expectation of an easy victory. What Blair failed to account for, however, was the depth of the Vikings' boys team, as well as their competitive edge. According to coach David Swaney, "a combination of underestimating Whitman and overestimating ourselves” allowed the Vikings to pull surprise upsets over Blair's swimmers in almost every event. Senior co-captain Ari Halper-Stromberg and sophomore Robert Feasley gave the Blazers the top two finishes in the 200 Free, but Blair would win no more races for the rest of the meet. 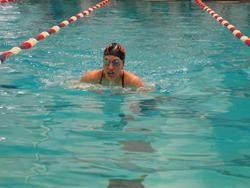 Instead, the Blazers found themselves repeatedly out-touched by Viking opponents at the finishing wall, shut out of victory by mere fractions of a second each time. This phenomenon hit the Blazers hardest in the freestyle events -- traditionally Blair's strongest -- as the Vikings took first in the 50 Free, 100 Free and 500 Free by 28, 11 and 23 hundredths of a second, respectively.

"In a lot of races, we should've gone one, three, but we did two and four” Swaney explained, referring to the places that he feels Blazers could have been able to capture. "We were hoping for best times, but we just didn't get a lot of them.” Instead, Swaney said, "We got touched out far too often.”

With so many events going to the Vikings, the Blazers were already down 68-89 by the time the last event –- the 400 Free Relay –- was about to begin, and victory was beyond Blair's reach. A failed Blair attempt to capture both first- and second-place in the final event by splitting up the top Blair relay team gave Whitman an extra two-point margin of victory, but had little real consequence: Even if Blair had swept the event, it would still have ended the meet with only 82 points to Whitman's 89.

Like the boys, the girls also found it difficult to defeat the Vikings in individual events; while the Blazers swam their best, Whitman's depth and talent won the Vikings the gold in every event. Junior co-captain Kelsey Dean (500 Free) and senior Karima Tawfik (100 Breast) both took second in their events; Tawfik, along with juniors Minh Huynh-Le and Diana Frey and sophomore Christie Lin, also helped Blair take the silver in the 200 Medley Relay. According to Swaney, both Frey and Huynh-Le swam personal bests against the Vikings, contributing a great deal to the girls team's efforts.

"A lot of people had best times,” senior co-captain Kendra Williams said of the girls team's performance. "Even though we lost, we did our best and had fun. It was a really good meet.”

Swaney agrees with Williams, commending the girls team for putting up its best fight against the Vikings and saying that he is far more concerned about the boys' loss because it was so unexpected. "I've made coaching mistakes, and I need to sit down and rethink the way I'm doing some things,” Swaney admits, saying that he plans to drill his team on stronger finishes to prevent so many Blair swimmers from being out-touched again.

With the Division I Championships only two weeks away, however, Swaney is worried about his team's ability to decrease its times before postseason begins. "I'm not as confident as two weeks ago, when we really thought the boys might get second,” he explained, adding that he is no longer so sure that the boys can out-swim Whitman again in the postseason. "There is a lot of talent in this county this year,” Swaney said. "We'll have to see.”

Halper-Stromberg and fellow senior co-captain Patrick Detzner, however, are more confident of Blair's success in postseason competitions. "We may have lost this meet,” Halper-Stromberg said, "but our boys are very fast and will do well at Divisionals and Counties. We'll see Whitman again later,” he began, and Detzner chimed in: "Next time, we'll kick their [behinds]!”

Blair's next swim meet will occur at 9:30 a.m. on Saturday, Feb. 5 at the Montgomery Aquatic Center. Instead of its original opponent, Wootton, the team will be facing off against Bethesda-Chevy Chase in order to make up the Jan. 22 meet that was canceled due to snow.

Kristina Yang. Kristina Yang is 1/10 of the Blair girls' volleyball team. When not on the court, she most likely to be running away from Magnet math homework, trying to pay off her three speeding/redlight tickets, or feeding her bubble tea addiction. She would also like to … More »