Boys' soccer defeated by Whitman in second round of playoffs

Although entering the playoff season with strong momentum, the boys varsity soccer fell short of counteracting the Whitman Vikings. Blair (8-4-2) lost to Whitman 1-3 in the second round of the playoffs, still giving a performance exemplary of their hard efforts all season.

Whitman's first goal came within the first five minutes of the game when a Viking free kick from the right sent the ball into the goal box where another Whitman player was able to head the ball into the goal. Not thirty seconds into the second half, the Vikings scored their second goal, catching the Blazers off guard. A Blazer pass was intercepted and the Vikings tore down the right side of the field and launched the ball past junior goalkeeper Kit Durban. The third goal was another header into the upper left-hand corner of the goal. 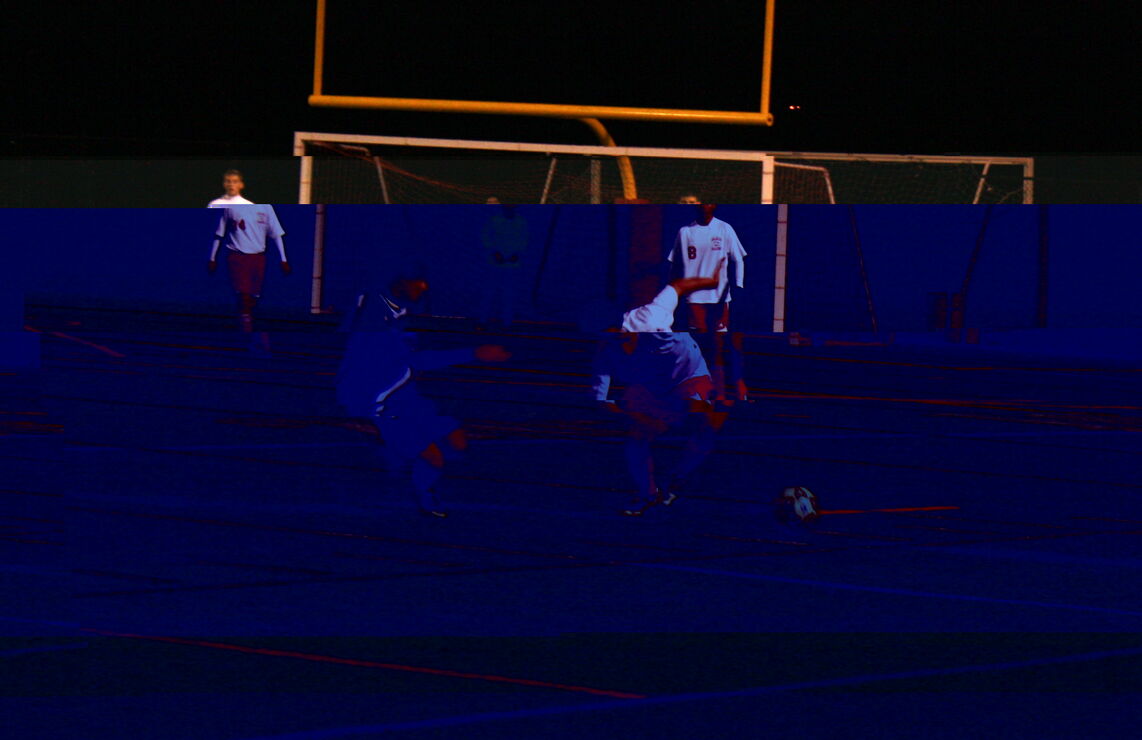 Senior co-captain Aaron Baldwin scored the sole Blazer goal on a penalty kick. After the Blazers had already attempted several goals, a few of them so close that the stands erupted in shouts of frustration, Blair finally had a chance to get back in the game.

Despite what the scoreboard may have shown, the game was much closer on the field. Blair started well, immediately rushing to the ball and pressuring the Vikings. The Blazers matched the Vikings' intensity at every turn. Whenever the Vikings would push into Blair territory, the Blazer defense would cut them off and send the ball right back to the midfield to be slammed up the sidelines. Head coach John Haigh was impressed by his team's play. "They did everything asked of them," Haigh said. "I was proud of them."

The Blazers had a great game as a team and their efforts on team were not slight in the least. "We have come a long way from being a team who is used to slacking off and being purely driven by talent," senior co-captain Xander Baldwin said. "We have become a team that has developed many people into better players."

Aaron Baldwin led the offense in his usual way, leading by example as he continuously beat Viking players to the ball. Seniors midfielders Jamie Thomas and Otis Banwell led the center by intercepting passes and dodging defenders up the sidelines. Xander Baldwin and senior Jaime Amaya anchored the defense, cutting off Viking attempts to score.

Whitman was a worthy opponent, showing off their skill set with crisp, structured passes, and working the ball up the field as they weaved through the midfield. "Skill wise, Whitman was the better team today," Haigh said. "But when it came to effort, we were right there with them." After their first goal, Whitman took the ball right back to the Blazer goal and almost scored again, but it was saved by Durban, who did an excellent job of thwarting Viking attempts on goal, several times diving to stop what surely seemed to be another Whitman goal.

The entire season, Blair has been surpassing expectations. "We were expected to be a below average team," Aaron Baldwin said, adding that the team had gone on to live up to a much higher potential.

Haigh said the boys team has made progress and is proud of the boy's effort. "I asked a lot of them," he said. "And I think that this has been a great growing experience, for all of us."