Despite a valiant effort, the varsity boys' soccer team let their first half mistakes get the best of them as their first home game ended in a dispiriting 3-1 loss to the Whitman Vikings.

The Blazers got off to a rough start, as Whitman scored their first goal just eight minutes into the game. Blair players had trouble gaining any steady control on offense at the start of the first half, and it was left to senior goalkeeper Jonathan Fortuna to defend against a barrage of Whitman players time and again. 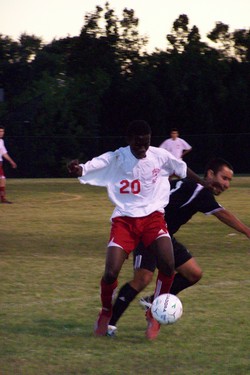 Photo: Junior George Noubossie scores on a rebound against Whitman.

Photo: Junior George Noubossie scores on a rebound against Whitman.

As the half wore on, the Blazers' momentum picked up, but they still could not gain possession of the ball and Whitman's defense remained rock solid. The Blazers fought to get back in the game, but could not net a goal despite several key opportunities. With twenty minutes left in the half, Whitman broke past Blair's defenders and scored, giving the visitors a 2-0 lead. The remainder of the half was marked by uneventful dribbling, as neither team was able to follow through with their passes.

The second half began with a bang, with each team making dangerous attacks at the opponent's goal. For the first time, Blazers began to control on the ball, and began attacking the Whitman goal with a force. Junior Hamed Marroquin fired the ball into Whitman's goal on an assist from Senior Sergio Quisquinay, but it slammed against the crossbar and bounced back out. But junior George Noubossie was too quick for the Whitman goalie, and fired the ball at their goal for a second time, scoring on the rebound.

But the Blazers struggled thereafter to keep up the momentum of the game and could not score again despite many bold attempts against the stout Vikings defense. The rest of the half passed in a blur of vain efforts to score on Whitman's goal by Blair players and skilled saves by Blair's Fortuna. With barely seven minutes left in the game, Whitman stepped up their offensive strategies and stole the ball. In no time, they had broken past Blazers and scored once again, sealing the victory for the Vikings. The game ended shortly thereafter with a score of 3-1.

The Blazers were self-critical in the aftermath of the game. Said senior co-captain Jonathan Safer, "We couldn't keep up in the first half. They were more in control than we were." Still, though they did not come out with a win, the boys remain hopeful about their next game. "It was a really good effort," said coach Adrian Baez, "but next time we need to start out with more solid offensive plays."

Blair's varsity boys' soccer team's next game is at Magruder on Thursday, Oct. 20 at 7 p.m.