But the hilarious but sick humor may not be for everyone 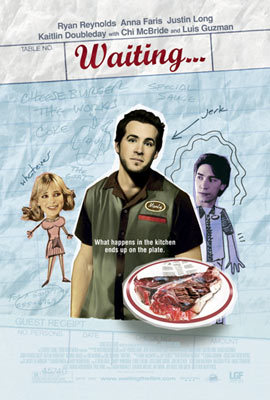 Photo:
"Waiting" is rude, crude and lewd but incredibly funny, at least to the mind of a 16 year old male. Maybe the lack of plot or any binding theme contributes to the mindlessness of the movie; nevertheless, "Waiting" requires almost zero intelligence to watch and delivers tons of laughs.

The lack of a coherent beginning, middle and end makes it hard to summarize what could be taken for a plot. But basically, the film follows the lives of a group of waiters working in one of those generic, family-oriented restaurant chains like Bennigans, Applebees, Fridays, etc. In "Waiting" waiters, cooks and busboys spend day after miserable day is at a restaurant called "Shennaniganz," the epitome of cheesy restaurant chains.

The movie is essentially a collection of the trials and tribulations these waiters face over the course of a full 24 hours. From dealing with unappreciative customers, a power-hungry boss and two lack-luster bus boy wannabees, one of whom is Andy Milonakis, to finding ways to deal with the monotony of restaurant work, the movie proves to be more like a series of short skits, sketches and character interactions rather than a solid plot. Ironically, the only recognizable storyline deters from the comedy of the film.

The main plot centers around a waiter named Dean, played by Justin Long, who is uncertain about his future. A waiter for four years, Dean had graduated from high school with good grades but never had managed to get out of town and make something of himself. Dean does have friends, including the hilariously insincere Ryan Reynolds, but he is still depressed by the mediocrity of his life. Conflict arises when Dean's boss, Dan (Anchorman's David Kroecher), offers him the position of assistant manager. And so arises the main character's typical inner-conflict—does he abandon his friends, who have stuck with him through good and bad, or does he accept the job, get a pay raise and become the mirror-image of his despised manager? In this case, the conflict adds nothing to the movie and instead makes the audience question the necessity of including such trite Hollywood garbage.

The indie film, directed by newcomer (and former waiter) Rob McKittrick, would have fared better by maintaining its quirky personality and not caving in to Hollywood drama. Who says a comedy has to have a plot?

The movie does shine when McKittrick creates hilarious skits, which feature some of the most outrageous humor and yet manage to give the audience insight into what is portrayed to be the horribly dull and unthankful job of waiting, cooking and cleaning up after ungrateful customers. In-between jokes about consuming massive amounts of narcotics and playing dirty tricks involving food and bodily fluids on ungrateful customers, the running joke has to do with a sick "game" that the title characters play involving showing each other their genitalia.

"Waiting" is a movie designed for a certain breed of filmgoer, one that does not mind exposed genitalia and will not cringe at the sight of greasy cooks playing the "five-second rule" with a piece of blackened steak about to be served. While "Waiting" does have its flaws, punch lines after hilarious punch lines make up for a weak at plot.

Waiting (93 minutes, at area theatres) is rated R for strong crude and sexual humor, pervasive language and some drug use.