Claymation stars leap on to the big screen with a hit

Let's face it: animated films are geared towards little kids, who admire characters like Bugs Bunny, Daffy Duck and little Nemo. Once kids reach a certain age, these characters lose their appeal because of their corny jokes, hackneyed pranks and childish image. Wallace and Gromit are the exceptions to this rule. 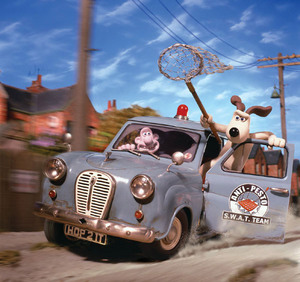 Photo: Wallce and Gromit in Nick Park's "The Curse of the Were-Rabbit."

Photo: Wallce and Gromit in Nick Park's "The Curse of the Were-Rabbit."

"Wallace & Gromit in The Curse of the Were-Rabbit," directed by Nick Park and Steve Box, is a flawlessly produced and hilariously written film, which appears in part-claymation, part-digital animation. Wallace (voice of Peter Sallis), a British-speaking inventor who loves cheese, and Gromit, his mute yet loyal, heroic and clever dog, form an intelligent and witty tag-team.

The film centers around the annual "Giant Vegetable Contest" held in Wallace's hometown. All the citizens in the city are ravaged by a batch of bunnies that have destroyed their beloved oversized crops. Wallace and Gromit are defenders of the produce, as their company, "Anti-Pesto," captures the bunnies in a safe and humane manner.

But after a failed attempt by the always-experimenting Wallace to brainwash the captured bunnies so they do not eat veggies, a new villain strikes the town's hearty harvest. A mysterious "Were-Rabbit" roams the city on moonlit nights destroying vegetation and causing chaos, and Anti-Pesto is sent in to capture it. The intrigue and hilarity that ensues is exciting and entertaining for viewers of all ages, not just children, and the mysterious Were-Rabbit's identity is revealed to be someone close to home.

The "Wallace & Gromit" movie comes from a line of Oscar-winning short films from the early 1990s made by Nick Park, featuring the adventurous pair in trips to the moon and encounters with a mysterious penguin and the duo's many inventions, including their innovative techno-trousers. The new film stays true to the classic humor of the shorts involving Wallace's love for cheese, Gromit's funny faces and the visual gags that come with claymation.

The physical evolution of Wallace and Gromit is evident in the new, flashy feature film from Park and Box, which took more than five years to produce. The claymation-based yet digitally enhanced cinematography is pleasing to the eye and advantageous to the intense level of storytelling within the film.

Despite the new film quality and digital effects of the movie, Wallace and Gromit stay true to their roots. The directors make several references to Wallace's well-known penchant for cheese and the duo's classic morning routine, in which a series of machines wake and dress the pair and feed Wallace — a minimal yet significant part of the film that represents the essence of the Wallace and Gromit adventures.

Lord Victor Quartermaine, a snobby, toupée-wearing hunter with a lofty, superior-sounding voice from Ralph Fiennes, serves as the source of much of Anti-Pesto's opposition and of their laughs. Victor is constantly losing or misplacing his fake hair, once trading it in for a similarly colored bunny and is vying for the hand of the lovely Lady Tottington.

Lady Tottington, (voiced by Helena Bonham Carter) has an especially bad bunny problem, and she enlists the help of Anti-Pesto. Upon meeting "her ladyship," Wallace falls for her, to Gromit's chagrin, and her astounding estate, including a "veg sanctuary." Bonham Carter's voice is sultry yet soft and is perfect for the film's lovely lady.

Wallace and Gromit's triumphant big-screen debut is a kid-friendly flick with spice, adding clever claymation to witty screenwriting and even keeping the big kids interested. A great choice for a younger sibling and a not-so-embarrassing G-rated movie for even the oldest of kids, "Wallace & Gromit in The Curse of the Were-Rabbit" is a delectable dose of pure fun.

"Wallace & Gromit in The Curse of the Were-Rabbit" (85 minutes, area theaters) is rated G.