Washington Football Team season review: is there hope for the future?

With quite the roller coaster of a season, the young WFT shows lots of promise for years to come

This season, Washington Football Team (WFT) fans got dragged through a rollercoaster of emotions. The season started with the yearly disappointment that inherently comes with being a WFT fan, but ended with a considerable amount of hope.

Let's start with the quarterback carousel, another normality for the WFT. Dwayne Haskins was named the QB1 heading into the season. Once Week 5 came around, Kyle Allen was named the new starter, and Haskins was demoted to the third-string spot. Allen got a few starts before suffering a season-ending leg injury, which meant the probable Comeback Player of the Year Alex Smith had to start at QB for the first time since 2018.

Smith won four of his first five starts. But, Haskins was called upon after Smith suffered a bone bruise to start in Week 15 and 16, losing both games, and being cut after Week 16. Smith started and won a must-win Week 17 game against the Philadelphia Eagles to clinch the NFC East, finishing the season 7-9.

But, in a surprising turn of events, Smith was ruled inactive for the WFT's Wild Card matchup against the Tampa Bay Buccaneers. This meant Taylor Heinicke, who was finishing his mathematics degree at Old Dominion just weeks before the game, was called upon to make his first NFL start against Tom Brady and the Bucs in a wild card game. Heinicke showed a strong performance, completing 26 passes for 306 yards with one passing touchdown, one rushing touchdown, and an interception. Heinicke did all of this after suffering a separated shoulder in the second half and gave the all-powerful Tampa Bay offense a run for their money. Ultimately, the WFT lost 31-23, but I thought Heinicke proved himself as a real candidate to be our starter next year. 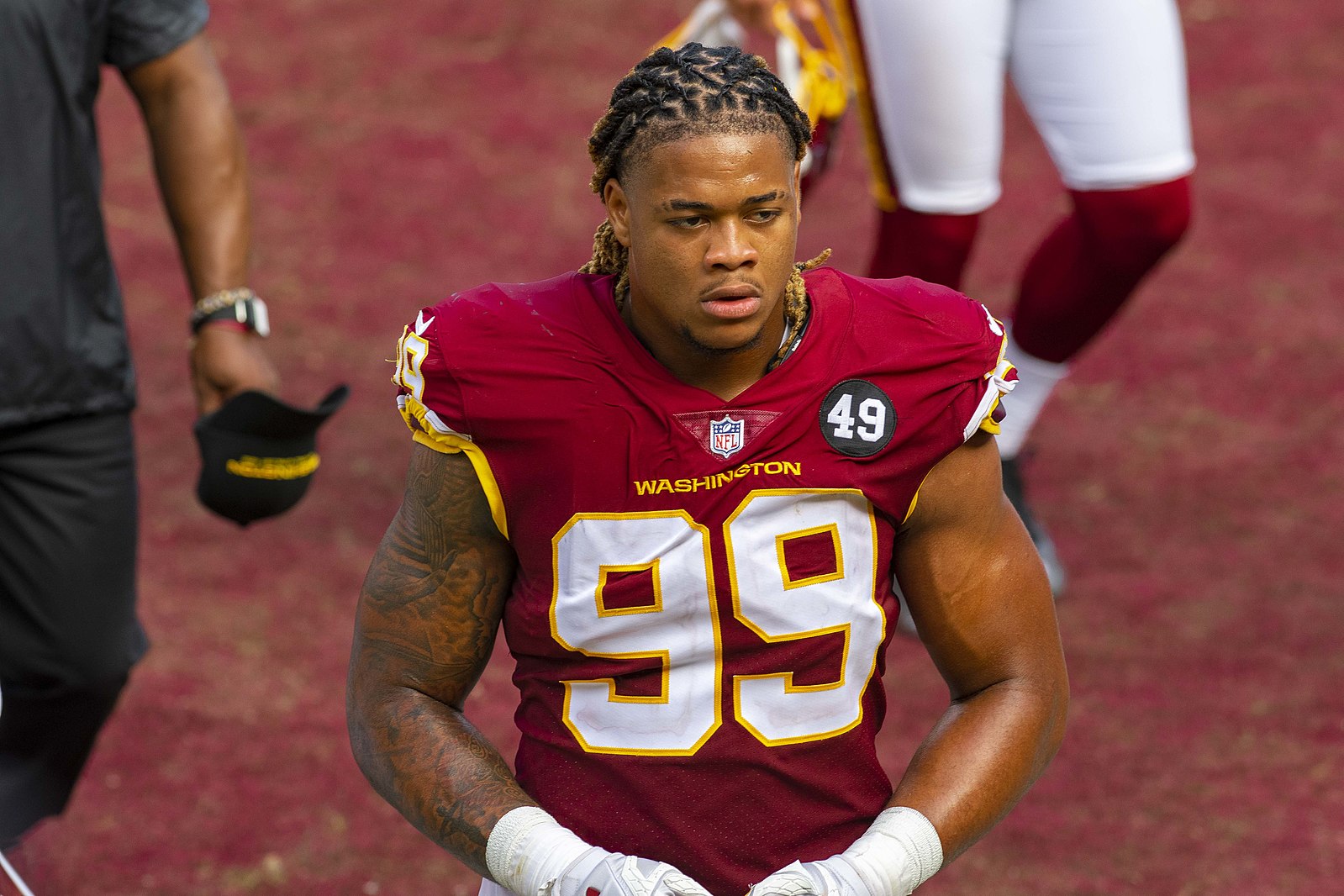 Photo: WFT edge rusher and NFL Defensive Rookie of the Year Chase Young earned a Pro Bowl spot this year and immediately became a leader on the WFT's defense (courtesy of Wikimedia Commons)

Photo: WFT edge rusher and NFL Defensive Rookie of the Year Chase Young earned a Pro Bowl spot this year and immediately became a leader on the WFT's defense (courtesy of Wikimedia Commons)

We can't talk about the WFT's season without admiring their young, exciting defense. Newly-signed defensive coordinator Jack Del Rio's defense was second in total yards per game, second in passing yards per game, fourth in points per game, and tied-for-seventh in takeaways, a huge improvement from last year. NFL Defensive Rookie of the Year frontrunner Chase Young ended with 44 tackles, seven and a half sacks, four forced fumbles, three fumble recoveries, and a touchdown. Rookie safety Kamren Curl proved he was a seventh-round steal for the WFT, finishing with 88 total tackles, four tackles for loss, two sacks, four pass deflections, three interceptions, and a touchdown. Resigning cornerback Ronald Darby and signing a new inside linebacker would greatly bolster this defense.

With this quarterback rotation and not a lot of weapons, the WFT's offense wasn't great this year. The defense should be applauded for keeping us in games. On a league wide basis, our offense was near the bottom of every stat, ending 30th in total yards, 25th in passing yards, 26th in rushing yards, and 25th in points. But, we do have the right to be excited about our current weapons in wide receivers Terry McLaurin and Cam Sims, running backs Antonio Gibson and J.D. McKissic, and tight end Logan Thomas.

WFT's offensive line, led by AP All-Pro first team guard Brandon Scherff, was ranked sixth in the league by Pro Football Focus. We absolutely need to resign Scherff this offseason. With rookie left tackle Saahdiq Charles returning from injury, there is certainly promise there. If Washington can add another wide receiver to accompany McLaurin and Cam Sims, that offense has potential to be very dangerous.

The biggest concern this offseason, though, is the quarterback situation. Smith was very successful as a starter this season, with a 5-1 record, but it was apparent that he lost a lot of agility and athleticism, which is no surprise after a broken leg. Allen will be back and ready to play this season, and of course the playoff hero Heinicke is in the mix.

Not to mention, there are several offseason moves that can be made for a quarterback. Most notably, the WFT could trade for Houston QB and 2020 NFL passing yards leader Deshaun Watson. There are also a number of free agents available, most notably Dallas' Dak Prescott. Washington should definitely make a push for one of these three. If not, drafting a quarterback with our first-round pick would also be a solid option. If Washington drafts a QB, such as Alabama's Mac Jones or North Dakota State's Trey Lance, they would probably have to trade up in the draft.

We saw, especially in Heinicke's playoff performance, that Washington really benefits from having a mobile quarterback. A mobile quarterback would be the missing puzzle piece that the WFT needs to have a legitimate offense. Lance, Watson, and Heinicke are all great options in that regard, while Watson is also an amazing passer. I would love to see a major push for Watson this offseason, he is a top-three quarterback in the NFL and would certainly boost us to a top-10 offense. But, if we're absolutely unable to acquire a mobile QB this offseason, I would be excited to see Heinicke start in week 1.

Lastly, I have to say, this team wouldn't be anywhere near where they ended without the great leadership of head coach Ron Rivera. For once, I think we have a smart front office that will listen to Rivera and we will make the right choices this offseason. This team is young, shows a lot of promise, and has a pretty great coaching staff around it. I'm excited to see what this team can do next year and for years to come.