For the first time since 1999, the Washington Wizards have started off 1-7 and are without star guard Gilbert Arenas. Arenas received a huge contract in the offseason, as did forward Antawn Jamison to keep the big three of Jamison, Arenas and forward Caron Butler together for another few seasons. So with the season still young, Silver Chips Online is here to give Washington fans a little preview of what to expect from the Wiz this season. 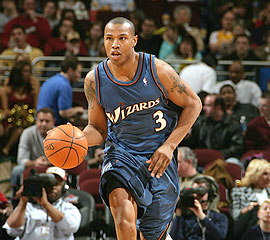 Photo: Co-captain forward Caron Butler will have to do a lot of the scoring until Arenas returns. Picture courtesy of the NBA.

Photo: Co-captain forward Caron Butler will have to do a lot of the scoring until Arenas returns. Picture courtesy of the NBA.

The Wizards run a form of the Princeton offense that involves a lot of movement in half-court sets and a lot of cuts to the basket. With Agent Zero out until maybe December or January, veteran guard Antonio Daniels will be relied on to run the point. While Daniels is nowhere near as explosive as Arenas is (when healthy), he is a solid point guard that head coach Eddie Jordan can trust to run his offense. Daniels moves the ball around well without turnovers and gets the ball to other players in positions to make shots.

The majority of the Wizards' scoring is going to come from the healthy portion of the big three, the captains Butler and Jamison. Jamison can command the post and score with his unorthodox "flip-shot." He can also stretch the defense with his outside shooting touch to free up other low post scorers such as center Etan Thomas. Butler is dangerous from anywhere on the court. He has a solid outside shot, great dribbling skills and the ability to get to the rim and the free throw line.

Thomas is going to get the majority of minutes at the center position with traditional starter Brendan Haywood out for four to six months with a wrist injury. Thomas himself is coming off of open-heart surgery during the previous offseason that forced him to miss the entire 2007-2008 season. It may take time for Thomas to get back into the swing of the game, but the Wizards will need him to start contributing offensively in the absence of Arenas and with shooting guard DeShawn Stevenson's current shooting slump. Stevenson needs to regain his consistent touch from beyond the arc, much like he had during stretches last season, in order for the Wizards to be successful. 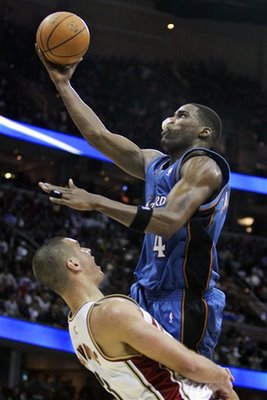 Photo: Co-captain forward Antawn Jamison is coming off an All-Star and 20-10 points-rebounds season. Picture courtesy of the NBA.

Photo: Co-captain forward Antawn Jamison is coming off an All-Star and 20-10 points-rebounds season. Picture courtesy of the NBA.

When Arenas went down last season, Jordan and the team committed to playing tough on both sides of the ball and beefed up significantly on defense. Butler is the defensive leader on the team with his knack for getting in passing lanes and stripping the ball from opponents. He is consistently at the top of the league in steals, but sometimes he gambles too much and leaves his man wide open for a shot.

Some of the criticism that Arenas received last year was that he didn't play defense and that the team played better team defense without him. But Arenas was a completely different player when he returned at the end of the season and could bring a new defensive intensity when he returns this year.

On the interior, the loss of Haywood is going to put a lot of strain on Thomas to block shots, defend the low post and grab boards. One perennial flaw in the Wizards' defense has been that they allow too many offensive rebounds and second-chance points. They are going to need Thomas and Jamison to be solid underneath and grab defensive rebounds - something Jamison has the size and power to do.

Rookie center JaVale McGee has shown glimpses of his athleticism on both ends of the court with powerful dunks and shattering blocks. McGee is averaging 7.5 points and one block per game in his four games of action so far. With Haywood out, McGee and fourth-year player Andray Blatche will be competing for minutes at the center position behind Thomas. Blatche has had moments of greatness over his short career but has yet to play consistently, something the Wizards desperately need from him.

Second-year guard Nick Young is emerging this season as a reliable scorer for the Wizards. He is third in scoring on the team at 16.6 points per game, behind only Butler and Jamison. With Stevenson shooting poorly and Arenas out, Young will have to carry a large offensive burden. Young has the ability to shoot the ball from distance but also explode to the rim, making him a tough player to defend for opponents. 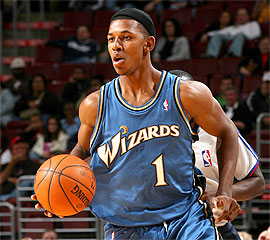 Photo: Second-year guard Nick Young is emerging as a reliable scoring threat for the Wizards. Picture courtesy of the NBA.

Photo: Second-year guard Nick Young is emerging as a reliable scoring threat for the Wizards. Picture courtesy of the NBA.

Aside from Young, Blatche and McGee, former Terp Juan Dixon has proven to be a reliable bench player for Washington. Dixon is averaging just under six points per game off the bench and knocking down a respectable 44 percent from beyond the arc. With Roger Mason, Jr., gone to the Spurs this season, Dixon can take his place as a shooting threat off the bench.

Veteran forward Darius Songaila is playing solid as he always does. Songaila brings intensity as well as an experienced presence on the floor. He makes solid cuts to the basket and is nearly an automatic shooter when open inside the arc. He is averaging just under five points per game in 16 minutes while shooting 50 percent from the field.

The Wizards have been in this situation before - in fact, they were in it last season. They just need to find a rhythm and close out teams to start winning. Butler and Jamison have been solid, and now Young is stepping up his game to help them out. The development of McGee will be key because the Wizards are thin inside.

The Eastern Conference is much harder this season than last. The classic powers still remain: Boston, Detroit, Orlando and Cleveland. Philadelphia and Miami are playing well again and Atlanta is also turning heads. The Wizards will need to start stringing together wins, or at least start winning, in order to compete for a playoff spot. But with Agent Zero likely to return much earlier this season than last, the Wizards will likely make the playoffs as the seventh or eighth seed and possibly play Cleveland again in the first round.