If you are a person in America with a television set and/or Internet access, you know that pop singer Miley Cyrus gave a rousing, if not highly controversial, performance at MTV's Video Music Awards this Sunday. Whether or not you saw the performance in real time is pretty unimportant at this point. What's important now are the implications of that show - what it means for Miley, what it means for America and what it means for the world. 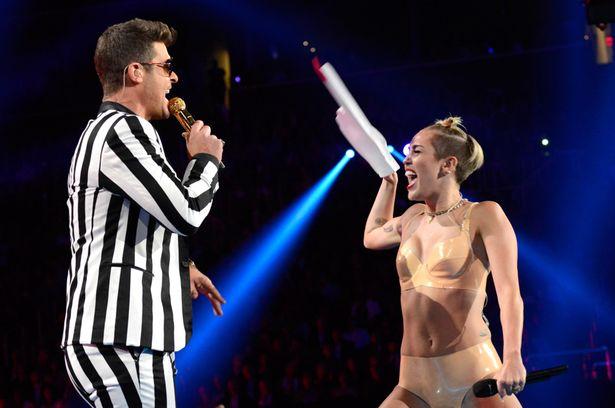 As far as America and the world go, it probably does not mean too much (sorry if you were expecting otherwise). Pop stars have been making baffling career maneuvers such as this one since time began. The story of a wholesome Disney star turned foam finger phallus-thrusting pop diva is admittedly pretty jarring, similar to the bizarre Madonna-Britney Spears kiss at the very same VMAs ten years ago, but it's hard to imagine this moment creating any political shockwaves beyond an uproar amongst parental watchdog groups and the like (the Parents Television Council for one lambasted the performance).

Although it may not be the catalyst for some kind of global crisis, Cyrus' new and aggressively sexual stage persona says quite a bit about where she is as a performer, and perhaps even more about where we are as entertainment consumers. Stars have rebranded themselves in the past, often overcompensating for whatever squeaky clean personalities they adopted to gain success in the music business in the first place. Yet, in a lot of ways, Cyrus' VMA performance was unique.

The grandiose and peculiar setting on stage last week lent more of a staged chaos feel to the whole affair than the aforementioned Madonna-Spears debacle a decade ago, which felt like a coquettish ploy for attention from two generations of pop royalty. Despite widespread disgust from much of the viewing public, Cyrus' performance blew up the Twittersphere before, during and after the fact. It does not seem ridiculous to assume that was the point all along.

Almost no one is claiming that this was a legitimately good performance. While Cyrus has appeared to be heading into diva territory recently (lyrical references to the club drug MDMA and wearing an outfit emblazoned with dollar bills), this appearance at the VMAs was still something of a shock to many who know her as Hannah Montana or as the Miley Cyrus who sang "Party in the USA." It was less of a good girl gone bad routine and more of a Bambi gone Alice Cooper, Theatre of the Absurd type deal. The performance was so unforgivable it's all too likely that that was what Cyrus and her team were aiming for. Creating buzz where none would otherwise exist and taking the lowest common denominator another notch lower. If there is any good news to be had, it's that our most popular entertainers would have a hard time stooping any lower. We can only hope.