We live in a society where the “Snyder Cut” exists, for some reason

The hype for the “Zack Snyder’s Justice League” film was real. It’s as if for the past several years, fans were fighting the good fight against Joss Whedon’s disaster in order to see Zack Snyder’s original vision. And Thursday, March, 18, they finally got that vision. And the reward fell short of their effort.

For background, Zack Snyder was the original director of “Justice League” before conflicts with Warner Brothers and the tragic death of his daughter (whom he dedicates the film to) caused him to leave the film. Joss Whedon, director of “The Avengers,” was brought in to finish it, and the rest is history. Eventually, fans waged an online war to give their director a chance to finish his movie. And if the fans were fighting out of sympathy for Snyder following the loss of his daughter, it would actually be quite touching. And perhaps they were. But if they were fighting for the release of a significantly better movie, it only speaks to how atrocious the original “Justice League” was. Because despite every fan’s best effort, the Snyder Cut is, at best, ok.

Zack Snyder is known for divisive superhero films, not masterpieces. His most notable works as of late are “Man of Steel” (2013) and “Batman vs. Superman: Dawn of Justice” (2016), both of which were not well-received by most critics. Granted, lots of fans enjoyed them, but they were nowhere near the level of “The Dark Knight” films, DC’s holy trinity in terms of filmmaking. Rather, they were kind of “eh” with some sporadic cool scenes.

And the “Snyder Cut” falls into this “eh” category quite well. The film tells a story in which Batman (Ben Affleck), Wonder Woman (Gal Gadot), Aquaman (Jason Momoa), Cyborg (Ray Fisher), Superman (Henry Cavill) and The Flash (Ezra Miller) must team up to protect Earth from conquest by villains Steppenwolf (Ciaran Hinds), Desaad (Peter Guinness) and Darkseid (Ray Porter). All of the performers do rather well, though some of the villains are not given very much to work with.

The fight scenes, particularly towards the end, while CGI-heavy, are entertaining. They scratch the fan urge to see all your favorite childhood superheroes kick some serious butt on the big (well, due to current circumstances, small) screen. The treatment of the characters is also surprisingly balanced, as nearly every team member gets some time in the spotlight or is important to the plot in some way. The villains are not quite so lucky—Darkseid in particular. Considering how heavily he was teased in the Snyder Cut trailers, it’s disappointing to see how inconsequential he actually is to the overall plot. 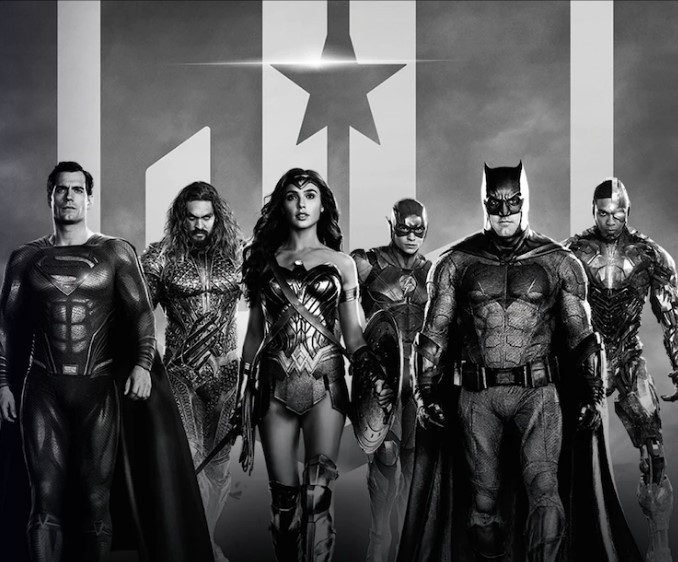 For the most part though, that’s where the strong suits of the movie end. And the flaws far outnumber these positives.

Just like the last superhero crossover epic to grace the big screen: “Avengers: Endgame” (2019), “Justice League” is too long for its own good. Way too long. There is no good reason for a film to be four hours long. Especially considering that nearly nothing of importance happens in the first half. Instead of good pacing, the film instead includes excessive slow-motion and an extremely diverse color palette that ranges from dark grey to mud brown. The film practically begs to be taken seriously.

But its quest to be taken seriously has two major flaws. The first is that the movie itself struggles to find a coherent tone. One minute everything is dark and moody, and in the next, The Flash is cracking jokes about hot dogs. It’s not that a serious or dark film can’t have comedic elements, they can and should. But at times, this movie thinks itself so serious and joyless that its humor doesn’t balance the film, it detracts from any kind of cohesive tone. Additionally, while its seriousness may help set the film apart from its MCU contemporaries, it also makes “Justice League” far less fun in the process.

However, the most disappointing thing about Justice League is the final scene, the one in which Jared Leto makes his return to the DCEU as Joker. The three-minute scene itself is not disappointing. Rather, it’s that this one scene between Ben Affleck’s Batman and Jared Leto’s Joker is far more interesting than the nearly four-hour movie that precedes it.

“Zack Snyder’s Justice League” is rated R for violence and some language. It is now available to stream on HBO Max.