Katrina victim starts over at Blair

"New Orleans is no more." Senior Carl Fortenberry recalls the words his mother spoke the morning of Aug. 28 when Hurricane Katrina, a category four storm, hit Algiers Point, New Orleans, washing away the only home he had known for the past 18 years. By the time Katrina struck, Fortenberry had already left behind his extended family, his friends and his life to drive with his mother to Little Rock, Arkansas. Now, he is a student at Blair struggling to begin a new life.

Fortenberry is one of approximately 70 New Orleans evacuees enrolled in MCPS, according to Kate Harrison, assistant director of MCPS Public Information.

Ten days after the fact, Fortenberry sits in the back of Kevin Shindel's fifth period NSL government class. From Little Rock, he drove to Silver Spring, and has since moved into an apartment on East West Highway. While the Federal Emergency Management Agency (FEMA) gets him situated in his apartment, Fortenberry's mother is searching for a job in New York City. She hopes to earn enough money to buy back land in New Orleans while it is still inexpensive and to move home in about a year. 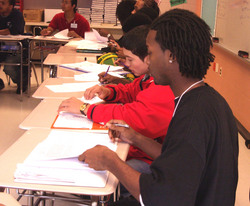 Photo: Senior Carl Fortenberry adjusts to his new classes at Blair after going to school in New Orleans his whole life.

Photo: Senior Carl Fortenberry adjusts to his new classes at Blair after going to school in New Orleans his whole life.

Although leaving everything behind was one of the toughest decisions Fortenberry made, he recognized the urgency of the situation. "People thought they would ride this one out," he says. "We knew we had to leave."

Leaving behind Algiers Point meant leaving behind a city that embraced eighteen years of Fortenberry's life. Now, he reminisces about the pieces of the city that he feels Silver Spring can never replace. "I miss everything," he says. "I miss the people, the food — Oh my god, the food. I miss Bourbon Street. They always had something going on Bourbon Street."

In Algiers Point, phone lines are down, and flooding has destroyed mobile phone towers. In the midst of the chaos, Fortenberry cannot get in touch with his uncle, who decided to remain home, hoping to ride out the storm. Fortenberry's five-year-old twin god-sisters are missing, and his extended family back home is still reeling from the disaster. "My grandmother doesn't want to eat," Fortenberry says, staring at the floor. "My whole family is complaining about starving."

Fortenberry has just begun contacting his friends back home, anticipating the tragic news that has constantly plagued his last five weeks. "Three of my friends are gone for sure," he affirms, gazing across the room. "One was shot by a man who wanted something he had on. The other two drowned."

Too little, too late

Fortenberry commends both FEMA and MCPS for providing him with a safe place to live in a time of disarray, though he is amazed at FEMA's scrutiny with questionnaires issued to identify those who need housing the most. "They give you a hard time; if you make a single mistake, they won't let you through," he says of the survey. "I'm lucky I answered half the questions right."

While Fortenberry reiterates his appreciation for the work FEMA has done to house the thousands Katrina left homeless, he blames the Bush administration for its delayed reaction. "They took too long," he says. "Before you make long-term plans, you need to feed people."

Even with warnings in the days before the hurricane, many did not take the evacuation advisory seriously. "I really think people thought it would pass over us," Fortenberry says. "New Orleans never sleeps — there were people partying on Bourbon Street right before the hurricane came."

In addition to his criticism of the government's response to victims of Katrina, Fortenberry suggests the city was lax in its evacuation efforts. "New Orleans wasn't trying to get people out," he says. "A lot of people were just stubborn, but some people just couldn't leave."

Just hours before Katrina hit, the sheriff of Algiers Point came on local television stations for his annual birthday appearance. Traditionally, people from the area would visit the sheriff on his birthday and hold festivities throughout the day. This time, though, his announcement was not one of celebration but of urgency. "No one come out to see me today," Fortenberry remembers the sheriff saying. "Get your families out of town."

Fortenberry estimates that another 10 to 12 months will pass before he can return to a fully restored New Orleans. He plans to begin a new life in the city where he grew up. Until then, this Blair senior is looking at months of support from his new school, his new neighborhood and his new friends. "Everyone has been great," he says of the Blair community. "Right now, you need people to comfort you, and that's what I've been getting here."