Lil Wayne's "Rebirth" is anything but rockin'

Despite its title, Lil Wayne's latest album, "Rebirth," evokes previous albums such as "Tha Carter III," as Wayne spits his typical lyrics about money and women. Now a record producer for his label "Young Money" with newcomers like Drake and Nicki Minaj under his wing, Wayne is experimenting out of hip-hop and into a new genre - rock. Though Wayne's attempt at a new style is admirable, "Rebirth" presents trite lyrics and a scattered sound. 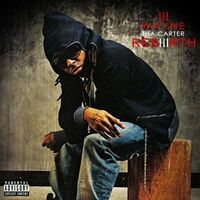 "Rebirth" was originally scheduled to be released on April 7, 2009. However, after several delays from Wayne's desire to perfect the album, it was finally released on Feb. 2. Wayne's first attempt at rock is a 12-track album that includes songs featuring Eminem, Kevin Rudolf and Nicki Minaj. Unfortunately, these big names don't add much to the quality of Lil Wayne's new songs.

On the album, Wayne proves that his raspy voice is more suitable for rapping than for singing. In songs, such as "Paradice" and "Prom Queen," Wayne sings, or rather whines, the chorus "Oh this ain't no paradice" over and over. His vocals are messily performed but he succeeds in one thing - wailing like a teenage boy.

Wayne does rap in some singles on "Rebirth." Although he raps the usual, his lyrics are below average. Throughout his career, Wayne has made his name in hip-hop for humorous and witty lyrics, as well as the craftiness of his rhymes. In "Rebirth," however, Wayne finds it acceptable to repeat "Da Da Da" continuously before screaming more lyrics. "Rebirth" simply has lyrics that are "Da Da Da" dumb.

Wayne's first single off of "Rebirth," "Prom Queen," received attention when it leaked in 2009. However, this song, and the entire album in general, is confusing to Wayne's fans. All the elements of the song are different - a bad kind of different - from what Wayne has produced in the past. Plus, Wayne ends any promise that the song had by whining explicit lyrics repeatedly. But Wayne does attempt to play the guitar in this track, which makes the song more memorable compared to the rest of the album. 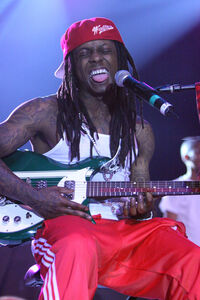 Photo: Some of the rock and roll tracks on "Rebirth" feature Lil Wayne playing the guitar.

Photo: Some of the rock and roll tracks on "Rebirth" feature Lil Wayne playing the guitar.

If listening to the entire album doesn't make listeners cringe already, the last track "The Price is Wrong," is sure to leave them annoyed. Wayne takes hardcore rock to a new extreme. Not only is the poor quality of the sound of the song difficult to handle, but the lyrics are too angry and repetitive. The chorus of the song is Wayne incessantly repeating "okay" before proceeding to verbally bash a girl for breaking his heart. Clearly something (not just the price) went "wrong" when Wayne decided to include this track on the album.

As a rapper notorious for his inventive lyrics and catchy beats, Wayne fortunately he has time to redeem himself after presenting this ghastly rock album. Since 2004, Wayne has produced three commercially-successful albums and been featured on tracks by the likes of Destiny's Child, Chris Brown and Wyclef Jean.

Since Wayne's rap career has been exploding thus far, it's surprising that he would want to produce an album with a rock and roll vibe, a genre that is clearly not his musical forte. Wayne has discussed the creation of future collaborative albums with other rappers like Juelz Santana and Lloyd and has talked about producing "Tha Carter IV." Hopefully Wayne will ditch rock, so his fans will be able to experience a true "Rebirth" of his career.