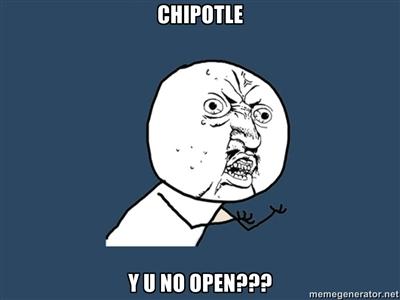 Photo: Let's hope this winter brings a certain restaurant's grand opening with it.

Photo: Let's hope this winter brings a certain restaurant's grand opening with it.

Monday will mark the 61st day of the 184-day MCPS school year, meaning we are now a third of the way through the annual marathon. The school year is finally beginning. In September and October, we enjoyed a day off every week or so. We rode the beginning-of-the-year excitement through Spirit Week and Homecoming, which made this past fall fairly manageable and fun. The weather has also been incredibly pleasant recently, culminating in a beautiful Thanksgiving break.

But in the next few days, we'll begin to see a transition. We'll see new movies, new clothes, and a new side of Blair, one that only comes out after the autumnal buzz wears off. Seniors are sinking knee-deep into college essays. Freshmen are realizing that high school actually requires more work than eighth grade. Bus-riders are realizing that shorts and a hoodie aren't going to cut it as they shiver while waiting for the school bus.

But the next leg of the race isn't all bad – the middle of the year offers some great things to anticipate. Blair's next sports season kicks off on Thursday, as Swim and Dive jumps into the winter athletics pool, followed closely by both Basketball and Wrestling. The holiday season will provide us, at the very least, more excuses to shop and party. And we're all waiting with bated breath for the opening of Four Corners' newest attraction, Chipotle.

But the post-Thanksgiving transformation will also be visible outside of Blair. On Saturday, we heard that the NBA finally reached an agreement for a new collective bargaining agreement that will end its lockout. It's probably a sign that the season is set to begin on Christmas Day. In the past week, we've seen heightened violence in the Occupy protests, including the infamous casual-pepper-spray by police on the campus of University of California, Davis. Now the combination of cold weather and deteriorating sanitation (and sanity) poses the question of how much longer, and to what extent, these protests will continue.

It is clear that the fall is coming to an end and winter is on its way. Although what it brings remains to be seen, I, for one, am ready for a change - even though I'm not going to enjoy freezing my pants off while waiting for the bus.